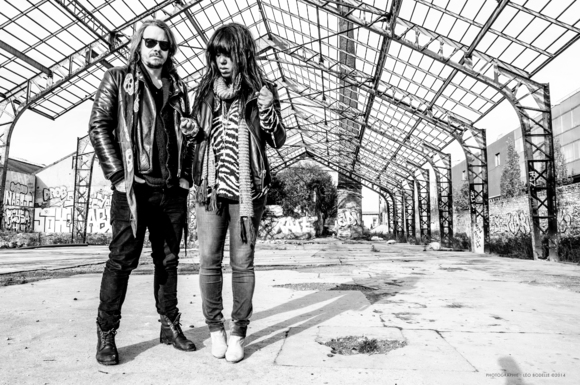 No other French band will have the same sound as Lafayette on ‘TN Motor’.


Recorded in single takes, the 10 titles are a storm of spears that beat the ears in a
suite of metallic and crimson guitars.

“How about we make an album and record it in Nashville?” Franck (Hedin) said to
Nathalie (Loriot). With that boyish smile across his face, how could anyone refuse?
The group has returned to its core dimension: a duo and has started work on
Lafayette’s third album. Never has preparation of a record gone so fast. The idea of
taking off on a White Stripes type adventure gave them wings. It would be dark and
thematic. For several weeks now, the group has been living with images of Detroit in
ruins: this legendary US music capital, the « Motor City » decaying because of the
economic crisis and devastated by the recession, has morphed into an apocalyptic
backdrop...the stuff of horror movie sets. Titles scratched on paper: ten and not one
more. Though the titles will continue to change, Franck and Nathalie had the guitar
parts, harmonies and sound in mind from the start...
If “TN Motor” was a postcard it would be made of lead. If it were a car it would be a
muscle car. Everything is minimal, right down to the melodies that melt willingly into the
lava and the length of the songs (with one exception) distilled to a compact 3:30.
An old adage claims that in rock, the third album is always the most successful. For
Lafayette, it’s just been verified.