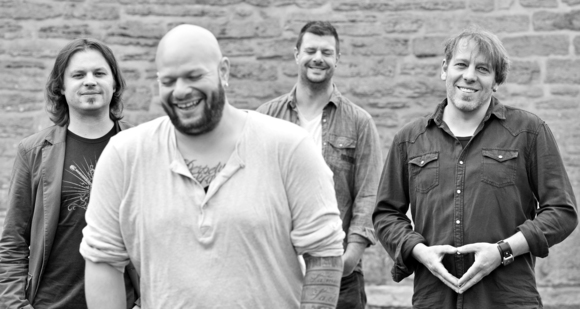 Lacson is a rock/singer-songwriter-band from Switzerland and Germany.

Lacson released their first "real" album in 2014 titled "1234567Days" produced by Dennis Poschwatta (GUANO APES).
As you can read in the bio, Dennis is also member of the band and is touring with Lacson.

If I should describe Lacson with less than one phrase:
HONEST, STRAIGHTFORWARD AND WITH LOTS OF SOUL,

In attempting to describe the musical career of Raphael Krauss in a single word, one arrives sooner or later at the most appropriate term: “adventurous”. Adventurous in the sense of eventful, but also synonymous with bizarre, unusual and unconventional.

Raphael was born in Switzerland into a family of artists with, as he describes himself, a rather anti-authoritarian educational stye. Growing up between fellow musicians and artists of different nationalities, Raphael knew early on in his life that he didn’t want to pursue the classic route of school and professional career. Raphaels passion was for music. While most taking their first steps through music schools and dark rehearsal rooms, the Swiss-born youngster took to the streets of France as a street musician, always with the dream of bringing his music closer to the people.

In his early twenties, Raphael sent his first EP to a number of radio station. His long-held dream seemed at first to come true: after a song in the Swiss radio hit parade, the young musician got his first record deal, with the chance to record his first album and go on tour with his own songs, but only under strict guidelines imposed by the record company. Krauss quickly realized that these restrictions did not match with what he envisioned for his music and so thus ended his first step into the professional music business, with the sobering realization that a record deal in itself does not necessarily bring with it the fulfillment of a musical dream.

Disappointed and angry at himself for compromising on his musical vision, Raphael decided in 2000 to turn his back on his homeland, buying a one-way ticket to the USA to undergo a hard test. “Sometimes you have to fall first in order to take a step forward” he says today about the times when he played the small stages of Brooklyn, sometimes only in exchange for a burger and a beer. However, these difficult times were instructive and only served to sharpen Raphaels desire to make music and bring it closer to the people.

Returning to Switzerland, Raphael rounded up a few musician friends and toured through Europe. After another artist contract again ended in disappointment and discontent, Raphael finally met the bassist Beat Diesel. Although he had always believed that his songs could always stand alone with his acoustic guitar and vocal, this meeting was in hindsight probably the key turning point in the musical development of the former solo fighter.

With the support and friendship of his new bassist, Raphael finally decided to tread a new musical path and so the band Lacson was founded in 2009. On the road again on the stages of Europe, Raphael had a random, perhaps even fateful, encounter with the drummer of the band Guano Apes Dennis Poschwatta. Dennis took a liking to the sound of Lacson and invited Raphael to make some test recordings in his own studio in Germany. After a week of recordings, it became clear that the chemistry was right, and so Krauss and Diesel decided to record the debut album of Lacson at Poschwatta’s Katzbach Studio.

In the position of producer, Poschwatta was infected with the energy and passion of Lacson’s music and joined Lacson as their third man. But he also brought a lot of professional experience and high expectations, sending Raphael on a tough learning curve. Raphael describes the early time of the recording of the album “1234567Days” as the hardest but most instructive time of his musical career. Even though he had spent nearly two decades on stage, Raphael had a lot to learn from his new mentor and companion. It was at this point, rehearsing and recording in the studio, that Lacson met studio engineer and guitarist Godi Hildmann. Godi also became quickly infected with the magic of the songs and shortly joined Lacson as their fourth man.

Through the musical journey in creating the album “1234567Days”, a deep sense of equality and friendship has emerged between these somewhat randomly conjoined musicians. Raphael Krauss appears to have arrived at his goal. With Lacson a musician’s dream has been fulfilled of the sort he always desired: to write lyrics and to bring his own music in his own special way closer to the people. The first Lacson album is not only a commitment to musical passion, but also a call that it is always worthwhile to fight for what is in one’s heart.