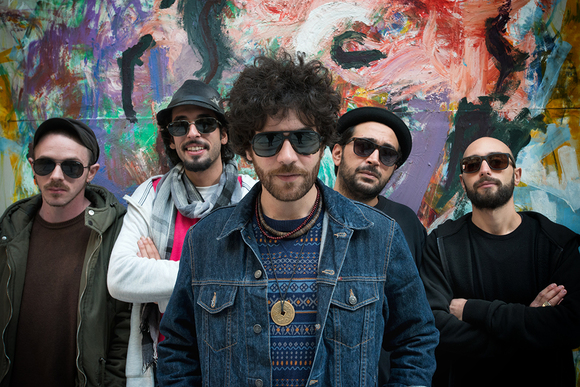 Since the release of their first album ’O vicolo ‘e l’alleria in November 2014, La Maschera took its place in neapolitan music scene as one of the most interesting independent bands.

It was soon noteworthy for its remarkable experimentation rate, so that it could be fully placed in the “World music” genre.
Confirming their attitude towards stylistic contamination, La Maschera meets the Senegalese musician Laye Ba: their encounter resulted in stylistic contamination and musical blending and two songs composed and performed together.
After their Senegalese tour, in November 2017, their second album, entitled "ParcoSofia", was released. In late 2018 La Maschera brought its music abroad: from October 12 to 19 they vere on tour in Portugal, from 25 to 29 October they were at Womex in Gran Canaria (Spain), and from 20 to 30 November they were in Canada in a mini-tour, guests of the Italian Institute of Culture in Montreal.
In November 2018 La Maschera win the Andrea Parodi Award, the most prestigious Italian contest of World Music.
In 2019, back from their new national winter tour, which led them to perform in twelve of the major Italian cities, they left for South Korea where they met the favor of experts and public at the Seoul Music Week and Suseong World Music Festival.
Back from Korea, they are getting ready to perform on stages of national and international festivals, such as the Szieget, the Home Festival, the Folkest and the Giffoni Music Concept, as well as several other dates of their summer tour.