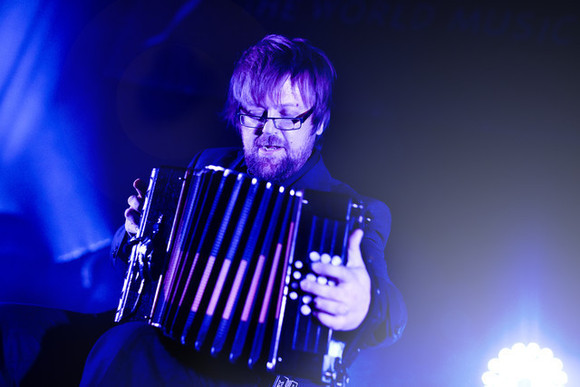 Deep breathing Finnish accordionist Antti Paalanen has created a new acoustic sound with the diatonic accordion, and he's given it a new name - the Breathbox - which is also the title of his latest solo album, released in 2010.

The artistic producer of the album is globally recognised musician and performance artist Kimmo Pohjonen. New album - Kraftsman - will be released by Rockadillo Records in September 2014.

One of the leading musicians in modern Finnish folk music, Paalanen has a powerful, open-minded command of his instrument, and his hypnotic and minimalistic tunes tell stories about the world of today.

He graduated as Master of Music from the Department of Folk Music of the Sibelius Academy, and is now working on his artistic doctoral studies, composing new music for diatonic accordion.
Antti Paalanen received a Showcase slot at WOMEX 11 - the world music expo in Copenhagen/Denmark, 26-30 October 2011. With over 750 Showcase submissions - the most ever received in WOMEX history.

Alongside his solo career, Antti Paalanen is a member of several folk music bands and line-ups such as Hehkumo, Hyperborea, Kiharakolmio, Trepaanit and Turkka ja Paalanen. Over the last few years he's been touring throughout Europe and in China, Russia and Mexico.