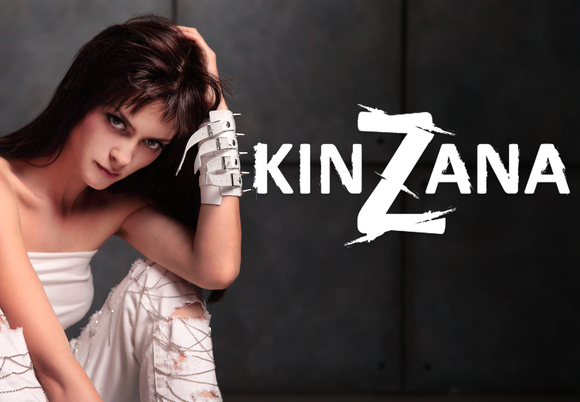 KinZana is a pop, pop/rock artist based in Kiev, Ukraine.

Born in Belarus, she started writing music at the age of 15. She writes and arranges the songs herself, performing live with band consisting of drums, guitar, and bass. In 2011 KinZana released her first electro pop single “Kisses In My Head”, which was welcomed exceptionally well by major Belarusian radio stations. Later, two other songs, “Burn Your Mind” and “I Feel You” have enjoyed the same success with frequent airplay.

KinZana’s song called “You’d Better Show” made the finals of the national contest among Belarusian composers to be presented at Eurovision.

In 2012 KinZana moved to Kiev to proceed with her music career. Assembling a band with drums, bass, and electric guitars, her original electronic arrangements have gained a new depth and energy.

“Live instruments gave so much power to my songs! I felt the pulse of my music. It sounds like good pop/rock, a bit sexy and a bit aggressive, like real me!” - KinZana.

The band worked on the program that had 18 songs. In late 2013 KinZana recorded first 5 tracks for her EP called “Under Control”. These feature the insistent dance beat of “Falling” as well as the ballad “Stay”. The latest recordings were produced by Andrei Lobatch and Joe Dochtermann. In-between live shows KinZana and her band continue to record other songs for the upcoming full-length album.

In addition to her own program, KinZana writes instrumentals and soundtracks. “I love writing music. When I work on soundtracks, I combine orchestral instruments with synths, live drums and bass guitar. This mixture sounds modern and original, I think. Some classical instruments, like flute, suit so well with contemporary synths” – KinZana.

KinZana is an unsigned independent artist, devoted to her fans.

Hi, I’m KinZana, welcome to my web page! If you want to know more about me, here is my story.

I was born in Belarus, in a small town named Grodno. At the age of 15, I began taking music classes at school, learned to play piano and started to compose my own songs. Tunes were coming to my head and I wrote songs one after the other, piling them up with little expectation that anything would come of it. At that time I hadn't considered pursuing a career in music, stuck in the expectation that I should learn a “proper” profession and have a secure job. So I studied international economics and began my first job in a finance department. I was still writing songs at home after work, tending a hidden desire to become a singer while working away day after day.

A friend of mine who liked the songs I wrote helped me mix demos of “Kisses In My Head” and “My Limousine" and sent them to radio stations. Despite the humble recording quality, playlist editors liked them and I was suddenly on the air! My dream had come alive and I found myself at a crossroads: pursue a career in music or choose job and financial security? I understood that I could not keep the job if I wanted to succeed as a composer and singer, but the office was eating my energy and inspiration. After days and nights of contemplation my family stepped in, encouraging me to choose the dream. So I quit my job, said good-bye to the office, changed my name to KinZana and turned to face the unknown. And… I was happy! I felt my wings spread. I realised that I was born for music. I was full of life, excited, inspired, and wrote more songs. “Burn Your Mind” and “I Feel You” soon appeared on the radio as well.

Soon one of my early songs was picked up to compete at the national contest for Eurovision. I sang it on a TV show and made it to finals. This was thrilling and, although the song did not win, I gained experience and a strong motivation to do more. At that time, all of my music was in a laptop and I was trying to figure out how to perform live. I wanted to sing on stage, and so decided to continue my career in Kiev, Ukraine. In Kiev, I assembled a band to bring the power of a live ensemble to the electronic tracks I had composed. Now the live performances became real shows. My music evolved, and together with the band we found our original “KinZana” sound! Together, we developed new songs and instrumentals, expanded our live show, and could now deliver a two hour performance.

We have now recorded the first EP, consisting of 5 songs for our new album, and there are more to come. I hope that you liked the music and the videos and you’ll come to see us when we are in your town! This is my story so far - I have found a simple way to be happy – choosing to do what you love. I guess many people say this, but taking the risk is worth it. I love what I do and I put all of myself into my music; on the stage you see the real me, the real KinZana. I’d be delighted if you connect with me on Facebook or Twitter or sign up to my newsletter. Please, comment on my songs and videos, I’ll greatly appreciate your feedback! Thank you for being here and stay in touch! Yours, KinZana