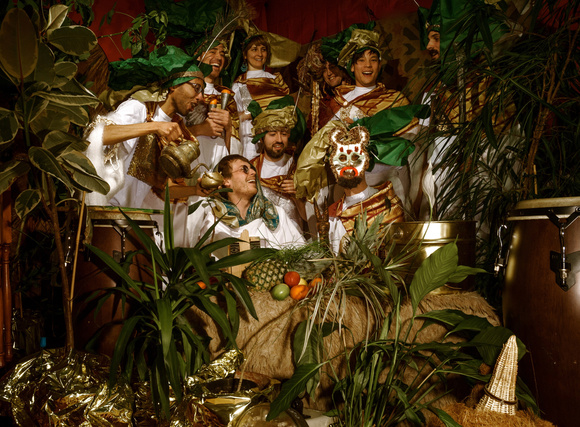 ***NEW ALBUM TO BE RELEASED IN 2017**** listen to teaser here- http://flyingswordfish.co.uk/the-golden-lagoon-debut-album-in-progres The Flying Swordfish Fuse African and South American Rhythms and melodies to create something fresh, powerful, highly energetic and fun.

A full show co-ordinates an evolving palette of smells, lights, smoke, ‘exploding-star’ balloons and an actual swordfish that flies through the air, with an original and varied set of music to transport you to a faraway, fantastical place. The creation of aromas through the burning of oils and incense, pulverising fruit and boiling herbs combine with the colourful and detailed music-synced projections to create a hypnotic and immersive spectacle.

It was circa 2008 when band leader, musical mastermind and conceptual architect Rodrigo Kerr was introduced to the highlife sounds of 1970s Nigeria. His love for African and Latin music grew quickly; Congolese soukous and congotronics, Saharan blues, Brazil’s many rhythms, Orchestre Poly-Rythmo De Cotonou, Beny Moré and other Cuban legends. While keeping a taste for the psychedelic that his current band employed, he developed his guitar styles and rhythmic ideas and gradually brought together The Flying Swordfish.