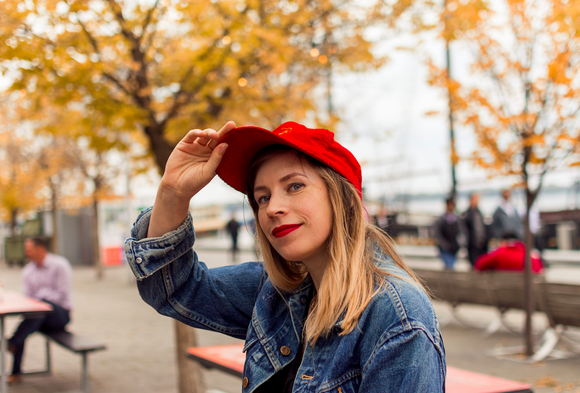 The new album from KASHKA is called "Relax," but that's not exactly what Kat Burns has been doing lately. Since creating the moniker (after retiring Forest City Lovers) she's released two albums, multiple singles, an acoustic EP, an instrumental piano album, written countless songs (including for other artists), gotten a dog called Char, toured living rooms and backyards, had her songs appear on tv, and help open up a craft brewery in Toronto.

Recorded mostly at Wildlife Sanctuary Sound, a converted studio in rural Ontario owned by Lisa Conway and Andrew Collins, the album is both sparse and rich: up front vocals, curated synth sounds and 808 drums coexist with lush string arrangements framing delicate melodies, at times explosive. Exploring themes of connection, feminism, and being "stuck", Relax draws the listener into a landscape of droney instrumentals and hooky choruses; feeling like flying while just daydreaming. It's a departure from her last single, the radio friendly 'Heavy Ghost', but a return to her roots in many ways; in Kat's words, "This came out of two years of writers block, travel, heaviness, frustration, and a lot of figuring out who I am, as a woman in this industry. It's imperfect, reflective, and a little weird, just like me!" The album includes stellar collaborations with Valerie Broussard, James Bunton, and LCON.

Kat Burns has never been one to sit still. Over the last decade in Toronto she has been slowly creating an extensive body of work- three albums with folkpop band [Forest City Lovers][1], and plenty more music with her latest 'folkpoptronica' project, KASHKA.

Debuting KASHKA through a collaborative album with producer James Bunton, Vichada, and following up with a Leon Taheny produced full-length, Bound, her sound was quickly coined 'folkpoptronica' by media as she successfully married organic and synthetic elements into her songs. Her voice is always in the forefront and minor-key melodies have always been her strong suit.

Between albums, KASHKA has put out a very well-received acoustic EP, Bones (with over half a million listens), and a number of singles. No stranger to licensing, Burns has had many of her compositions placed in network television, short films and commercials over the years. Most recently her song, "Smoke It Out" was featured on primetime show, The Killjoys.

In her "down-time" Kat illustrates for local publications, maintains a voice-over career, and publishes weekly videos on her YouTube channel. Not one to sit still, indeed.