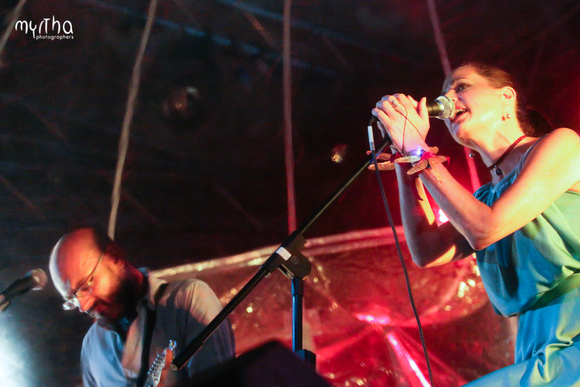 IT Lombardy – Alternative
Kalweit and the Spokes
Send Message

Kalweit and the Spokes is an alternative rock, folk, post-punk band from Milan.

Kalweit and the Spokes is a project that came about in Milan, Italy in 2009 through a side collaboration between Minneapolis born vocalist and painter Georgeanne Kalweit, guitarist Giovanni Calella and drummer Leziero Rescigno who also produced their debut album Around the Edges (Irma Records, 2010) inspired by the colors and scents of the Salento area, in South Eastern Italy, and the deserts of the American South West; a surprising melding of “old school blues”, folk and post-punk, worked out in its most essential form with the song as the focal point. Songs which form intricate pathways, both real and imagined, inspired by mysterious characters like silent film diva Clara Bow, or by a painting, as in 'New York Movie' by Edward Hopper, and describe a poetic landscape but also the social-political unrest of our times. Organs, various noises and sounds, a harmonica and percussion complete the cornucopia. The single, 'Ice Man', is dedicated to Otzi, the man found in the ice after 5,000 years in the Italian Alps.
Video: http://www.youtube.com/watch?v=pil2ai68eVs

Mulch (Irma Records, Oct., 2013) is Kalweit and the Spoke's second album, this time with drummer Mauro Sansone. Mulch is full of stories from Georgeanne Kalweit’s native land of Minnesota and her beloved Minneapolis. After more than twenty years of living in Italy, Georgeanne delves into the memories of a world that no longer exists in 'Kate and Joan' where Georgeanne tells about her own upbringing and family in a sort of reckoning with the inexorable passage of time or in 'Wetutanka', the spoken word/song about an island that has witnessed many different lives and situations. This second work by Kalweit and the Spokes maintains the alternative country, post-punk sound of their first album Around the Edges and is likewise populated by characters both real and imagined as in 'Barbie Bit the Dust', dedicated to the most famous doll in the world, a powerful icon which, though maybe a bit outdated, still manages to influence the collective imagination in regards to the idea of a female stereotype. The concept of solitude and alienation that characterizes modern man is also addressed as in 'Liquor Lyle's'. But Mulch also looks at current addictions and dependencies which society has adopted in order to survive through problems of the day, with the risk that some real monsters are created in the meantime as in the single from the album 'Hank's Hour' which inspired the video http://www.youtube.com/watch?v=wlPpIz-kAbw shot in Stockholm in March, 2013 with video maker Marco Balletti. After a successful crowdfunding campaign through the Italian Musicraiser (a Kickstarter but for music projects only) Kalweit and the Spokes carried out a successful 2 month radio campaign on College Radios in the U.S. and Canada through Tinderbox Music of Minneapolis with over 220 radios playing the entire album on rotation. The band is currently promoting the album in Italy.
Live performances include theatrical nuances that make the concert an event full of surprises, without ever compromising the rock n roll nature of the show. There is a performance art vein running through the live show, with video projections and the incorporation of objects. Vast plains of folk make up the sound scape which open up onto peaks of post punk and valleys of experimentation, creating moments of reflection alternated by a heavy, electric charge.
Live shows often capture the audience not only for the quality of the music, and for Georgeanne's charismatic persona, but also for the ambiance created, which is at times theatrical, others minimal. After the positive radio promo experience in the U.S. and Canada, the group is even more excited about exporting their music live. The show, with its rock n roll roots, is engaging also because of the mystique created around the songs. Being that both albums are in English, desire to export the sound live has never been greater!

Kalweit and the Spokes have been compared to PJ Harvey, Calexico and Gun Club.

- The group presented their first album Around the Edges at the Milan Triennale Museum of Contemporary Art playing inside a plastic bubble (4 x 4 metres) built specifically for live shows: http://www.youtube.com/watch?v=l1VI2UqnSNE

The bubble appears in the video of the first single 'Ice Man' directed/shot by Piero Tudisco in Salento, Italy: http://www.youtube.com/watch?v=pil2ai68eVs

- In October, 2013 Kalweit and the Spokes were guests on Caterpillar, a radio show on Italian National Public Radio2 to present Mulch with and interview and acoustic set.

- Several songs from the first album were used by Dolce & Gabbana in 2011/2012 for videos of backstage / runway shows: http://www.youtube.com/watch?v=-iGwFGjF6os

- Music from both albums is part of the documentary film soundtrack The Procession of Carletto, Directed by Federica Biondi which will be presented in film festivals in 2014.

- The song 'The Last Sign' is the opening soundtrack for Criminal Crisis, the noir/comic web fiction written/directed by Toni Brunetti, 2013: http://www.crisicriminale.it/

- In October, 2013 three instrumental versions of songs from Mulch were chosen by the Discovery Channel for the programme Vegas Hot Rods.