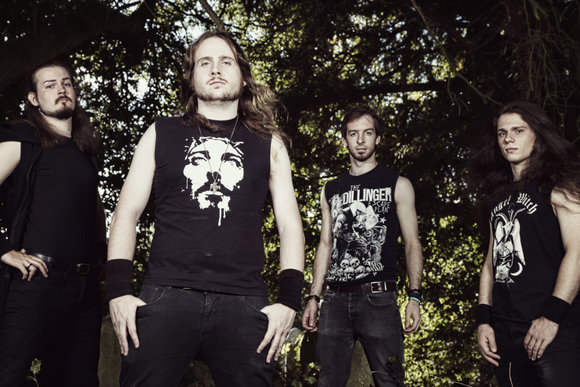 Kaine is a leading force in the British Metal Revival formed in 2009 by Rage Sadler (rhythm guitars & vocals).

The band is a NWOBHM inspired 4 piece. They have played over 150 shows and has supported some of the best known acts past and present such as NWOBHM legends Praying Mantis, Dennis Stratton (Iron Maiden), Deep Machine and American Thrash legends Mordred as well as current acts such as Savage Messiah, Absolva (ex-Fury UK) and ZP Theart’s I-AM-I (ex-Dragonforce).In 2015 Kaine played alongside NWOBHM and Thrash legends such as Diamond Head, Tygers of Pan Tang, Holocaust, Tysondog, Lawnmower Death and Anihilated at Wildfire Festival in Scotland.

Kaine completed two tours in 2014 the first alongside Monument (featuring ex-White Wizzard members) and the second supporting Mordred on their 10 date reunion O2 Academy tour of Britain and Ireland.

In 2014 the band released its second album “The Waystone”. The album was recorded at Angry Bee Studios in London and produced by Akis K (RIP 2015) and mastered by Z-Plane. The album sold out of the first pressing during the pre-order phase and the lead single “Iron Lady” has over 9k views on YouTube. The second pressing of the album subsequently sold out also.

The band was voted the GMA Breakthrough U.K. band of the year in 2013. The results were Kaine (15%), The Defiled (14%), Fallen Fate (13%) and Wretched Soul (12%). In 2015 the band was nominated as the Best British Band at the TBFM Awards, with Rage Sadler receiving a nomination for best singer and the band’s performance at Wildfire Festival was also nominated for best performance.