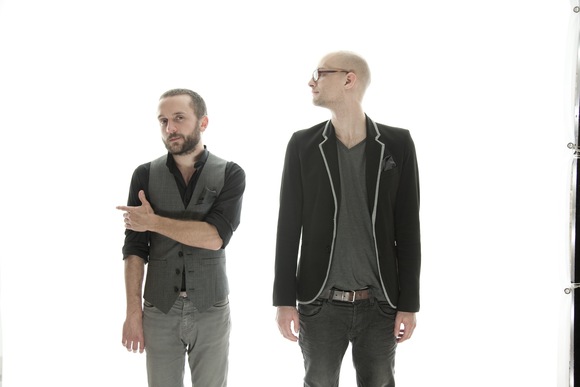 What happens when an American folk-songwriter teams up with a French/ German electronic producer?

The answer is some of the catchiest and most lyrically honest pop music is made! The name is Junior. Now listen up.

if you like to read
How did they meet? Was it when the cops closed down that party in KreuzKölln? While waiting for the first train at Alexanderplatz? A mutual friend? A Craiglslist ad? At Berghain? Perhaps they were competing for the affections of a certain young lady who was flying to Barcelona the next morning? Or maybe all of the above...

So what happens when a French/German producer whizkid crosses paths with an American singer/songwriter in the murkiest depths of Berlin? What do you call it?
Ian Fisher + Fabian Kalker = JUNIOR

Whatever it was, they decided to meet the very next evening at Kalker's studio and hammer out a few tunes. No big expectations. Off the cuff. Spur of the moment. I see a beat box and an old Wurlitzer electric piano with a few broken keys. An electric guitar. Late-night observations scribbled onto beermats. An old bullet-mic was lucky enough to catch the powder burns and there was just enough space on the hard disc. The result is the group’s knockout debut "Self Fulfilling Prophets".

Who played what? Who bought the drinks? What about the girl? None of that really matters. Fisher sings his lyrics alternating between the coy charm of a Harry Nilsson and the reptilian smirk of a Mark Bolan. But he's cool enough to know that he isn't THAT cool, which makes him SO much cooler. Kalker's beats are crisp and to the point. The chord-changes are just clever enough to keep you on your toes. There's enough ear-candy floating around to make these otherwise skeletal tracks feel finished. Like a t-shirt that's torn in all the right places. Like a carnation in the ashtray. Like finding the right song when you turn on the radio.

...but it's already tomorrow. I can't quite remember what happened. The sun is shining. She left a note, but not a number. At least they wrote a song about it.

Album Tracklist “Self Fulfilling Prophets”
1. Die Bushwick
2. I don’t listen much
3. Bad Habit
4. Unreal City
5. At least I wrote a song about it
6. Living in the flesh
7. Traces of a Maker
8. Spanish Harlem Incident
9. Echoes
10. Skindeep Times