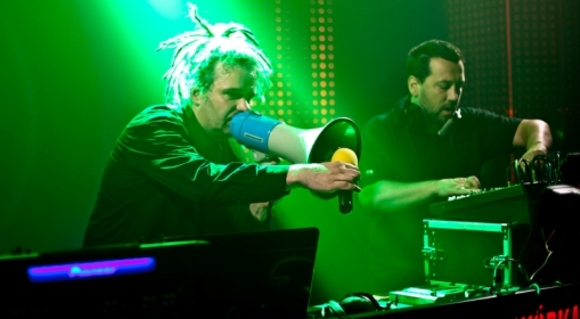 In 2013 they celebrated round 25 years since their first session, one of the very first of this kind in Poland. Despite the passage of time Joint Venture stay true to their principles of being unique and eclectic. According to their motto „School of Heavy Dance”, the sets are enriched with dub dynamics in real punky style. DJ Bass Reprodukktor Priest Maken I still runs and jumps in a priest uniform and Activator gets mad on the effects & mix.

JVSS are on the radical side of roots music: roots: reggae, electro dub, modern ethnic music, rasta jungle & dubstep. You won’t dance here to sugary melodies and lyrics. At their sessions you can hear many tracks not or rarely heard on other Polish sounds. It is a place for unique special versions, unreleased tracks, dubplates, remixes out of Activator’s Studio As One and other songs encouraging to dance and fight for better tomorrow.
Activator is one of the most experienced Polish producers. He has travelled around the world as a sound engineer for the most successful Polish world music act – Warsaw Village Band. He also worked both live and in the studio with almost all Polish top Polish reggae acts and beyond. Activator released a compilation of his remixes entitled „Remixy” (Home Appliance Records, Poland, 2003, then licenced to Productions Spéciales, France, 2005) with the works he has comitted for artists like Macka B, Zion Train, The Rootsman etc. You can also hear his work on Adrian Sherwood, The Rootsman, Warsaw Village Band or Zion Train’s releases. Studio As One are also mastering specialists (Zion Train, Dubterror albums etc.).
In JVSS his role is a dub master – using effects, adding space and craziness to the music and Maken’s chatting. Thanks to his experienced ear the sound system always kicks with proper equalization.
DJ Bass Reprodukktor Priest Maken I, the founder of JVSS, is both a selector and MC / stage performer, wearing a priest uniform on stage. For more than 5 years he has hosted „Strefa Dread” weekly reggae show on the Polish National Radio, channel 4 - Czwórka. Joint Venture feat. VJ Majonez performed live audiovisual shows many times there. Maken also owns a booking agency specializing in bringing various roots/dub/world music artists to Poland, especially to Ostróda Reggae Festival. He was an executive producer for two Polish albums recorded in Jamaica – Rastasize and Star Guard Muffin. His voice can be heard on Paprika Korps’ and French Brain Damage’s albums.
Joint Venture Sound System were co-producers of „Dub Out Of Poland” compilation series – first ever Polish dub compilations as well as „Upmixing” – Warsaw Village band’s remixes collection.
During all those years JVSS performed hundreds of parties in Poland and abroad (Czech, Slovakia, France, Germany, Russia, UK) and experienced many adventures.