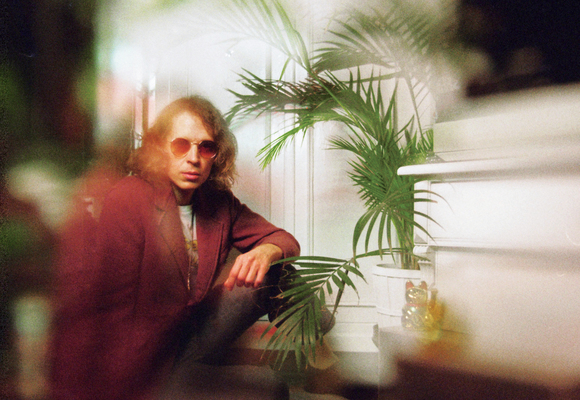 'The new album The Imposter is dreamy and Bowie-esque...

It's a really engaging and adventurous record, I would highly recommend it', Lauren Laverne, BBC 6 Music

'This is a really cool new release by talented Aussie singer-songwriter Joel Sarakula... I love this actually... It's like modern Northern Soul', Craig Charles BBC 6 Music

Do you like Love songs? After spending a lifetime avoiding this subject in song, Joel Sarakula finally admits that he does.

On his new album „Love Club“ Sarakula relives the golden age of Soulful and Romantic Pop music and connects it with a modern aesthetic. While a deeper message of love and peace flows through the record, Joel Sarakula is no old fashioned hippie: “‚Love Club’ is about connecting to reality and re-framing the idea of romantic love and loss in the present, loveless age. ” Featuring eleven songs touching all genres from disco to blues, from soul to soft-rock, Joel Sarakula’s “Love Club” is a profound pop statement.

Joel Sarakula has travelled the world in search of his muse, experiencing everything from being a victim of Caribbean carjackings to performing in the remote fishing villages of Norway, via the dive bars of Europe and the US. It was the hodge-podge musical tapestry of England’s capital that finally drew him to a settling point, in the wake of seemingly never ending run of shows. With personal tastes that span from the more avant-garde to soul and pop greats like Sly Stone, Todd Rundgren and Hall & Oates, there are clear nods to contemporaries like Unkown Mortal Orchestra, Erlend Oye and Toro Y Moi in terms of ambition and style.

With his last two albums “The Golden Age” and “The Imposter” collecting strong radio plays at BBC Radio 2, BBC 6, BBC London, XFM Joel Sarakula has been play-listed nationally in Europe including WDR 5, FluxFM, Radioeins, Bayern 2, Deutschlandfunk and Deutschland Kultur Radio in Germany as well as in Benelux and Italy and Spain. He is a regular fixture on the live festival and club circuit in the UK, Europe and internationally including appearances at SXSW, Primavera Sound, Glastonbury, The Great Escape, Liverpool Sound City, Scala London, Tallinn Music Week, V-ROX (Vladivostok) and Reeperbahnfestival Hamburg.

“Love Club” is Sarakula's bold and unashamedly emotional next step. In essence the album is a homage to the soulful singer & songwriter artistry of the Seventies filtered through a darker contemporary lens - fitting for these uncertain times. “I always shied away from generic love songs,” the Sydney, Australia born songwriter admits, “but on this record I embraced the subject wholeheartedly... and intellectually, looking at themes of love, lust, loneliness and everything in-between.” Take the first single “In Trouble”, co-written with Michele Stodart of The Magic Numbers, as the best example for Joel Sarakula’s unique, and honest approach to making music. „We Used To Connect” questions the changing nature of relationships in our social-media addicted world: ‘We used to connect in the real world too, now the touch of your hand is a digital cue'.

More than a year in the making, Joel Sarakula recorded „Love Club“ in various studios around London and Berlin capturing soulful performances from his many musical comrades on vintage analogue equipment. “This record has truly been a labour of love. Recording and privately sharing these performances amongst my collaborators started to feel like a bit like a club – I guess that lead to the album title! I was surprised how much I actually enjoyed the ‘love-making process’ and I look so much forward to playing these new songs on stage with my band.”