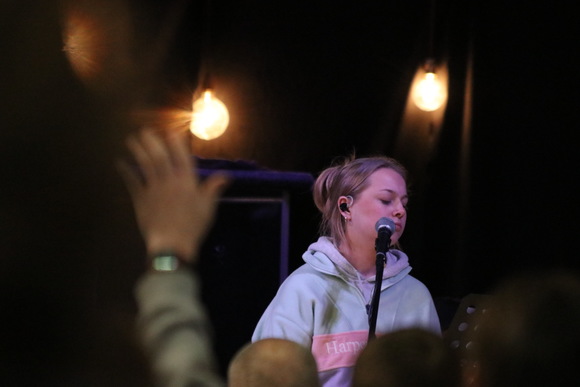 Jess Waddilove is a down to earth, lighthearted 19 year old up and coming artist based in London.

Her genres are mainly based on pop with elements of funk and jazz. Jess has a quirky yet tasteful style which sees crimped hairstyles, baggy flared jeans paired with oversized garments come into play. She loves a high top trainer with simple white converse boots being a staple in her wardrobe. Jess grew up in Dubai attending a performing arts school from a young age which led her to perform in several musicals, adverts and performance-based activities. She always knew from a young age she wanted to be involved in a performance based career. She came back to the UK seeking musical opportunities playing at local venues and festivals with her dad accompanying her on the piano. On return to the UK she attended college studying performance and production and continued to study at London's leading music academy ICMP. Jess has performed at many gigs, a significant event among many shows including performing at Alex James’ Big Feastival in 2016.. She has also sang backing vocals on Scottish band ‘The Boxtones’ single ‘It’s Time’ whilst out in Dubai. Jess is super excited for 2022 as she is working alongside Resound Media on a six track debut release, co-writing alongside ‘the 101’s’’ front man Dexter Fawcett. The next steps for me after this release would include touring with my music on a national and international scale, playing bigger sold out shows and achieving a record deal. Please come along and support me on my musical journey to see where my music career takes me!