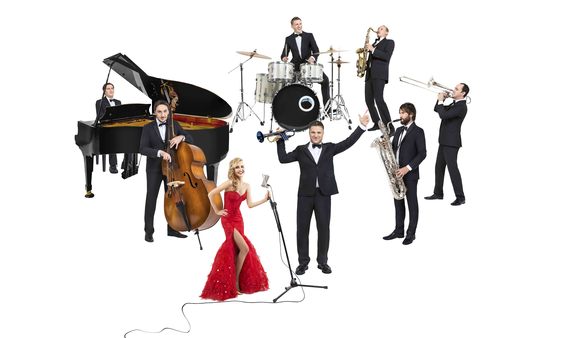 JAZZ DANCE ORCHESTRA (JDO) is a positive mixture of pop tones, club rhythms, classic music mixed with some Russian folk and a bunch of funk, jive and jazz notes.

It all started when Vadim Zaydin, a trumpeter and composer who played with the respected Russian orchestras of Garanyan, Lundstrem and Butman, decided to set up his own band with a strong brass section. He invited his colleagues to join his project and together they started to play American 20-30’s music.
They started their rehearsals on Christmas Eve, and it was its special atmosphere that influenced Vadim Zaydin to play jazzy music for relaxation and dancing. Since then, the name of Jazz Dance Orchestra reflected the character of the music and its members: dynamic, positive, active and dancing.
The band consists of talented Russian musicians who gathered in Moscow and created a new music taste and extended the life of the sounds of jazz.
The name “Jazz Dance Orchestra” was spread by word of mouth so fast that soon the band gathered a big group of fans that filled all concert halls they were performing in. Hundreds and thousands of people are sharing their music in the Internet.
All JDO members have great experience in jazz and pop music. Musicians also played with the American jazz artists, such as Michael Brecker, James Brown, Joey Calderazzo, Allan Harris, Deborah Brown, Carmen Lundy, Rene Marie, Kim Plainfield.
Jazz Dance Orchestra performs at the biggest Russian International Music festivals, such as Usadba Jazz, Jazz in Hermitage Garden, Lady in Jazz, Jazz Koktebel, Vdoh and others.
Jazz Dance Orchestra is honored to play at important international events such as: ХХХ Summer Olympic Games in London (Russia House in Hyde Park), APEC Forum in Vladivostok (Cultural program), Moscow International Film Festival, St-Petersburg International Film Festival, International Forum of transformation in Kazakhstan and others.
You can also see JDO in the famous Russian TV shows such as ProjectorParisHilton. JDO songs are aired on the Russian jazz and lounge radio stations.
With the help of United Music Group Jazz Dance Orchestra released the album “Russian Souvenir”, which reached Top 10 in Yandex.Music streaming service. The songs combine Russian folk traditions with jazz rhythms. Bossa nova and New Orleans jazz flesh out Russian lyrical character.
Now Jazz Dance Orchestra works on writing their own songs and always ready for the new experiments in music.