Jamila & The Other Heroes 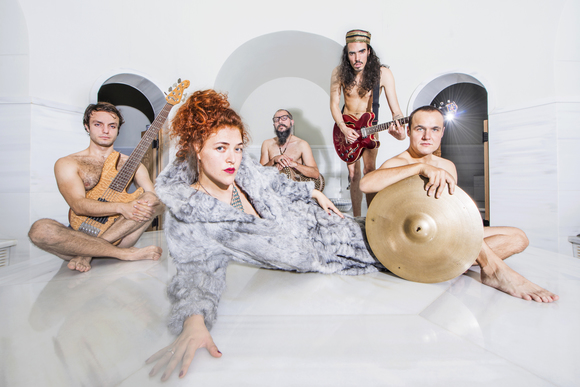 JAMILA & THE OTHER HEROES is a wild Berlin based band that wants to make you fly! They combine PSYCHEDELIC DESERT FUNK with political content. To conter racist agitation the five musicians share the richness of diasporian identities in sound. "For us, music is not free of politics! Since especially women of color are underrepresented in the music industry, we want to set a sign for emancipation and empowerment. That's why we become heroes and are determined to stand up for a more just society in our lyrics and sounds," explains 32-year-old lead singer Jamila Al-Yousef.

Their latest single BORDER SNYDROME احلام بلا حدود recently won the European Short Film Festival Music Video award. With queer performers from Palestine and Syria the video production created a safer space of togetherness, the opposite of the racist border discrimination the song is about, as Jamila shares her personal struggle of traveling as a white passing person with Palestinian roots.

Let yourself be carried away by an incomparable sound of psychedelic guitar riffs, vibrating on a warm and earthy fundament of wavy bass runs and Arab percussion sounds, as well as heavy hip hop und rock influenced drum beats. The dance floor JAMILA & THE OTHER HEROES create is a breeding ground for people to meet and practice togetherness - the musicians’ response to the currently operating exclusion mechanisms of our time.

The message of the band is simple: “All of us can be Heroes! Let’s discover our super powers and make the world a better place.“