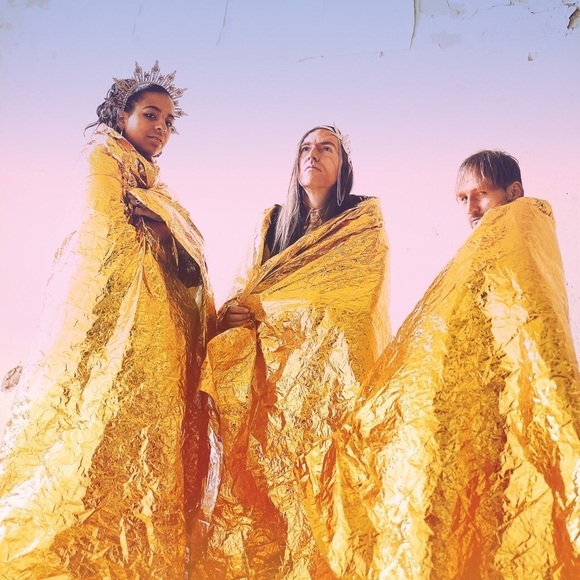 Oyèmi, Lemmy and Chris subsequently embarked on a phase of
intense touring be
fore returning to the studio to create their
sophomore album GOLD, set for release in October 2021.
GOLD is a supercharged blast of future pop, transcending
borders and defying pigeonholes, an album arising from the
band’s predisposition to experiment. GOL
D is not only
danceable, poppy and endearingly intricate, it also flys in the
face of the status quo, ask questions of the current state of
affairs and the oppressive mechanisms in our society. GOLD is
no blunt denunciation, however, but a soundtrack to ac
company
the realization that there is strength in individuality, thereby
unlocking a new level of productiveness.
Diverting melodies coalesce with a familiarly vociferous wall of
sound to create an atmosphere which galvanizes the band’s
pursuit of freedom.
Thanks to a seemingly limitless arsenal of
effect devices and a sizeable stack of amplifiers, JAGUWAR
create a wealth of elegant soundscapes. Shimmering tonal
fragments infiltrate layer upon layer of aural strata, leading into
catchy indie pop hooks which
prelude an epic storm of
thunderous guitars. Oyèmi and Lemmy alternating vocals are
the missing links in a world of stark contrasts.
The band’s gaze is clearly fixed on the future. GOLD is more
than a symbiosis of intricate playfulness and the empowering
strength of innermost desires. GOLD is a call for justice.