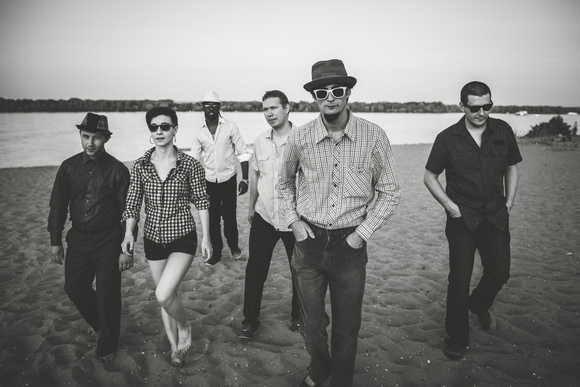 Jacuzzi Project is a unique formation of the new music stage in Ukraine.

Even though the project is not limited with any particular style, there’s yet a certain direction of contemporary European sound based on mixture of jazz and electronic music.

The band was started in 2008 as experiment of musicians with slightly different music preferences. Fearless of juggling with new European trends, they managed to transform their experience into debut album “Cheeeeek”, published by “Kuvshinka” label in Odessa in 2009.

It was both released on CDs for retail stores and online in numerous e-stores. In order to promote the album, band had performed in several concert halls around the country.
In 2010 the band brought a new sound with new devices, which resulted the new program development. However it hadn’t affected the core of the project – mixture of high grade European sound with various blends and genres.

The new program was equally enjoyed by fans at jazz events as well as electronic music festivals. JP performs at jazz fest ‘Live in Blue Bay’ in September, 2010.
The new program was also presented in May 2011, where JP shared the stage with a soul legend – Karl Frierson from De Phazz, and in July at ‘Z-Games’ Kazantip festival. It also coincided with the second studio album ‘Sweeeeet Muse’, released in May 2011. Style.in.ua announced it as ‘the project to form a new contemporary sounding of Ukraine’.

2012 gave the project a new expansion with ‘Jacuzzi Fam’ label and its first release – a single called ‘My Lovely Enemy’, which was presented at ‘Jazz Koktebel’ international festival on September the 1st.

In 2013 Jacuzzi Project made several shows in Russia and participated in largest electronic music festival Kazantip – Z21, which gave the project an international status. Later that year we founded recording studio HI-5 based on our experience, reaching for the new level of sound and video production. From the very beginning of 2014 we’ve been creating a new album at new studio, that will hopefully be released in the first half of the year.