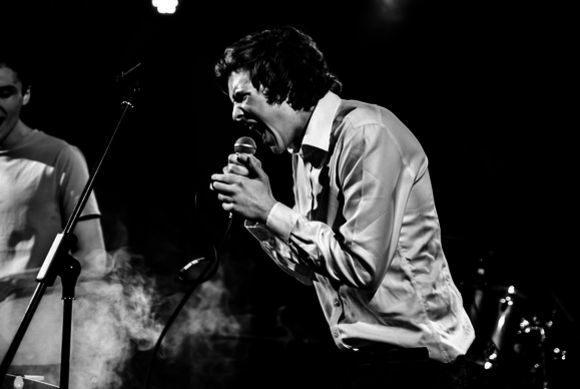 A bright and energetic kaleidoscope of complex percussion supported by strong melodies, trombone riffs interplaying with multi-layered orchestration and a remarkable voice reminiscent of early Bowie shimmering over the top.

It’s not Pop, It’s not Rock. It’s Jack Found.
Jack has developed a unique style through his classical training (Chetham’s, Manchester) which has provided him with the skills of a multi instrumentalist, giving a strong sonic depth and musical width to his songs.
His influences are many and varied; Beck, Of Montreal, Bjork, The Flaming Lips and Bowie, The result sits somewhere in the hallowed ground of David Byrne (Talking Heads), Depeche Mode, Franz Ferdinand and Jarvis Cocker, remarkable company for a twenty-two year old.
Jack and his band, now based in London, bring together an array of fabulous talent from the North of England, Wales (Jack and big brother Tom), Italy and the East End. All trained musicians, they play tight, they entertain, they have choice moves. You will smile, you will sing and you will dance.
Reviews for Sundown (his first single) paint the picture: “With nods to the more colourful side of Britpop, it’s refreshing.. it’s very "Something For The Weekend," in stereo, a beaming chorus and husky vocals... oh so slightly Super Furry Animals... it’s one of those songs. you listen to it once in the morning on your way to work and catch yourself humming it, hands in the sink as you wash the dishes, Tuesday week, 8PM”.
In 2019, Jack and the band played a 9 date tour across the UK as well as appearances at Kendall Calling, Boomtown, FOCUS Wales, Belladrum and MMVV in Catalonia. Keep an eye out in 2020 for more shows, more releases and an album.