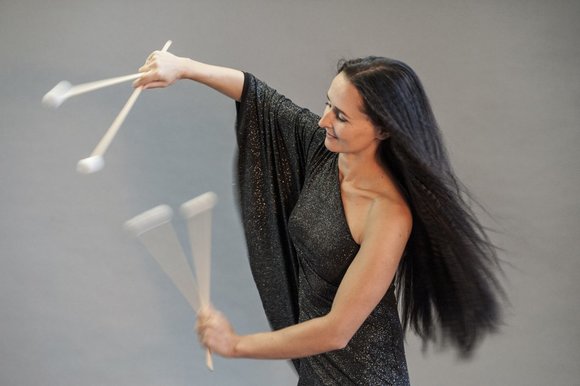 Studied Jazz Mallets with Bill Molenhof and Roland Neffe at the University of music in Nuremberg.

After finishing her classical percussion studies in Poland she decided to move to Germany in order to develope artistically and started her Jazz studies. She received her diploma in 2012 and finally achieved her Master degree in 2014.
Izabella is one of very few female Jazz vibrafonists in Europe and the first from Poland.
During her studies in Poland and Germany she received various scholarships und won several prices in competitions both for perfomance and composition.
She played with different well known musicians such as Tony Lakatos, Leszek Zadlo, Nippy Noya, Nicole Johänntgen, Magnus Öström, Steffen Schorn, Norbert Nagel, to name a few.
Besides her career as Vibraphon soloist and Bandleader she started to write and arrange her own music for different Bands in a variety of musical styles.
Her debut CD „Cuéntame“ was recorded at the Bayrischer Rundfunk and supported by the cultural department of the city of Nuremberg. On this CD she is accompanied by topclass german musicians and the well known singer Efrat Alony from Israel.
Apart from that she founded a annual Vibraphon Festival in Nürnberg/Fürth in order to introduce her instrument to a wider public.
New Project: "Sisters in Jazz" and Izabella Effenberg Trio.

Izabella was also 8x Polish Shotokan Karate Master and won a silver medal at the European Champianship in 1999.