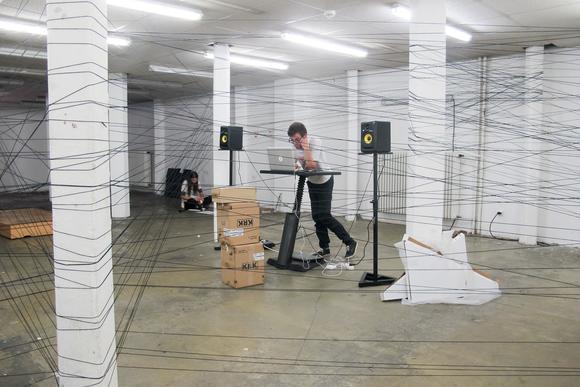 Industries is a music project by Markus Hetheier.

He is an electronic music producer, DJ, sound artist, workshop facilitator and practice-based research student at the Manchester School of Art. His artist name links his post-industrial German hometown and his chosen home Manchester to his music in which he explores the relationship between the self and the city through the use of field recordings. Industries’ music can be classified as left-field electronica; he combines field recordings of the city and synthetic sounds to create a sonic journey from ambient sounds to organically evolving beats. In the last ten years he has performed in various venues in Germany and the UK ranging from interdisciplinary art spaces to bars and music festivals. In Greater Manchester he performed at the Sounds from the Other City Festival, the Festival of Music & Culture, Your Stage (Contact), Refract:19 (Waterside Arts), Chorlton Arts Festival and RELAX (Waterside Arts). In 2022 he set up the regular queer electronica night FLUFF together with Norrisette at Fuel Café Bar which serves as platform for queer electronic music producers and live performers. He also recently played a full length gig at Eastern Bloc opening the first Hyper Violet event, a showcase for emerging talent in electronic music in Manchester. He has played radio shows for Limbo Radio, Synthetic Noise, Reform Radio, the School of Electronic Music and alto radio. In 2020 Industries released his first two singles ‘Air’ and ‘Reform’ using field recordings of Manchester’s rain and construction sites and streamed four performances, including one digital live concert for Mossley based arts venue The Vale and one online DJ set for the first ever Silver Pride. He was commissioned for an audiovisual documentation of lockdown life by whatsticks theatre and wrote a two-track EP called ‘A Walk’ with Nevsky Perspective using field recordings of their lockdown walks in nature which was released in January 2021.