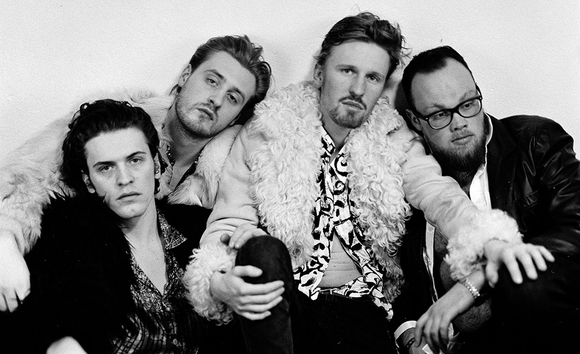 For critics, they invoke comparisons to Tame Impala, Foals or Radiohead and don’t fall through - HYMMJ belong to those rarities of the german music scene, who succeed with english-speaking pop music with an international sound.

Detached of any time and genre, the band merges the nostalgia of the 70s with the modernity of the 21st century, atmospheric New Wave meets dark indie rock, melancholia goes with euphoria. In one moment they nonchalantly flirt with big pop gestures, right before they withdraw into psychedelic walls of sound.

The band has made a name of themself with their tremendous live shows in their hometown, the crazy overflowing Berlin. Their unrestrained passion, the musical comprehension for the moment and their love for improvisation creates a unique energy, which has since spilled far across the borders of the capital: After the release of their debut EP „A Potential Cause For Rain“ (2017) they’ve played support slots for such illustrious and musical diverse acts like The New Pornographers, Cassia, INVSN, Starcrawler or Vulfpeck‘s Theo Katzmann and at several international Showcase festivals like ENEA Spring Break in Poland, c/o Pop in Cologne, Sonic Visions in Luxembourg, or three Shows at Alternative Escape in Brighton.

Aside from the stage national and international media have been enthusiastic: The European online magazine Europavox applauded for „sublime songwriting and perfect production and delivery“, the Canadian Blog The Revue certified that „their potential is extraordinary“ and others like IndieBerlin, Diffus or thatnewmusicblog followed the hymns of praise.
In spring 2019 HYMMJ self-released their second EP „Nobody Can See Us“, funded by german music office Initiative Musik. The songs take the listener into the relentless world of the twenty-somethings, always searching for freedom, independence and the personal luck, torn apart between all the different possibilities, which never comply with the own utopian ideas. The positive echo was even louder with several international reviews, interviews and airplays and lead to the final accolade by Sonic Seducer: „This is where Alt-J start to rock and Radiohead close their laptop and weep their guitars!“

„When Alt-J start to rock and Radiohead close their Laptops and weep their guitars - very promising!“ — Sonic Seducer
„Ever wonder what would happen if Artic Monkeys and Tame Impala had a love child?“ — IndieBerlin
„Hottest Indie-Newcomer from Berlin!“ — Herzmukke
„Bowiesque!“ — Nothing But Hope And Passion
„Sublime songwriting and perfect production and delivery.“ — Europavox
„An extraordinary enrichment for the german music scene!“ — Soundkartell & egoFM
„Their potential is extraordinary.“ — TheRevue
„They know how to transport feelings, sometimes reserved and introspective, sometimes passionate and generous, burning like fire under the ice.“ - Indiemusic.fr
„HYMMJ are among the best to play with your emotions.“ - Le Sac à Son