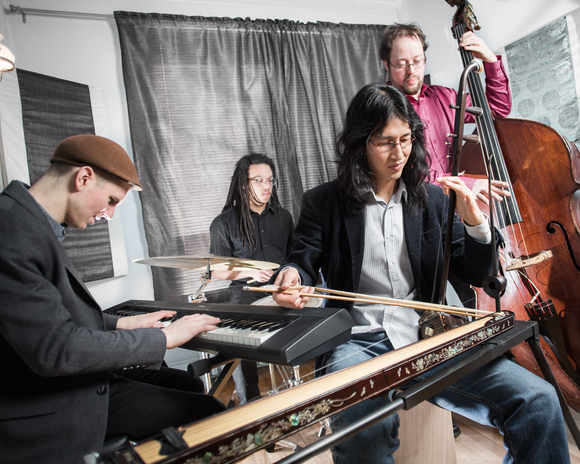 In concert, he presents his compositions recorded on his first album, "On the Steps of St-Paul's", released in 2014. His music skillfully combines his Vietnamese and Chinese heritages to North-American jazz music. He performs his music accompanied by his quartet.

Huu Bac was born in Vietnam. At the age of 2, his family moved to Montreal, Canada. He is a disciple of Pham Duc Thanh, master of dan bau, vietnamese monochord. He studied jazz guitar at McGill University, and chinese erhu at Shanghai Conservatory. With the group Sonidos Vivos, led by composer Lucho Quequezana, he performed regularly in Peru and learned to play the quena. He performed for televison programms on TFO, and ARTV; for radio on CBC radio 1. In 2009, he recorded for the show “Totem” of Cirque du Soleil, and for “Canotgraphie”, a show by artistic director Robert Lepage. In 2010, he was a finalist for the “Montreal Arts Council Diversity Award”. In 2011, he performed at the “Africa-Asia” festival, in Paris. In 2011 and 2012, he was awarded a grant from the Canada Council for the Arts in composition. In 2013, he performed at “Mundial Montreal”. His first album, On the Steps of St-Paul's, was released in 2014 and is a set of original compositions. His music skillfully combines his Vietnamese and Chinese heritages to North-American jazz music.