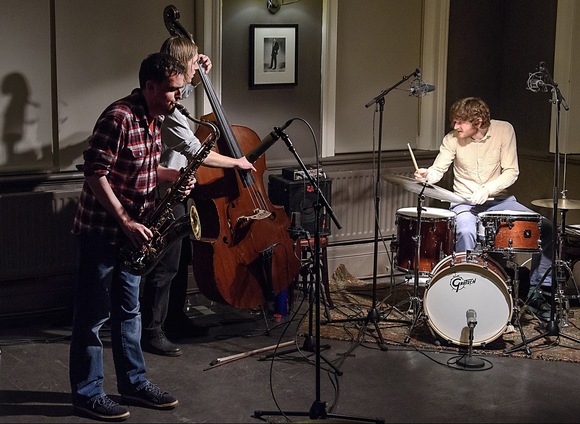 HTrio was formed in Manchester in Autumn of 2014 as a natural evolution from saxophonist Hanslip and drummer Cheetham's regular duo sessions at Sunshine Studios in the city's Northern Quarter.

Comprising three improvisers with contrasting backgrounds in jazz (Hanslip), contemporary classical music (Willberg) and rock (Cheetham), HTrio present a fresh angle on the well-familiar tenor sax/bass/drums format, with a strong group identity formed through many hours of jamming. Together they create long-form improvised pieces that range from abstract sound to dense free jazz whilst retaining a strong sense of structure and melody.

In July 2015 the trio played a successful mini-tour of Manchester (Freedom Principle), Birmingham (Fizzle) and Liverpool (Blank Canvas) to full audiences and highly positive reactions. In 2016 HTrio were selected to be ambassador artists for round 4 of Jazz North's 'Northern Line' scheme, during which they played at Manchester Jazz Festival, Derby's Out Front! festival, and Newcastle's On The Outside series in 2016; in 2017 they played opposite Oxford Improvisers, at Fizzle in Birmingham, Blank Canvas in Liverpool, and at No Bounds! festival in Sheffield. For 2018 they are planning a run of gigs with pioneering NY-based trumpeter Nate Wooley.

The trio have recorded sessions at Manchester's Islington Mill and at Hallam Mill in Stockport, which you can hear on their self-titled, self-released first CD here: https://htrio.bandcamp.com/releases . They have also since recorded another session in Manchester which is being prepared for release.