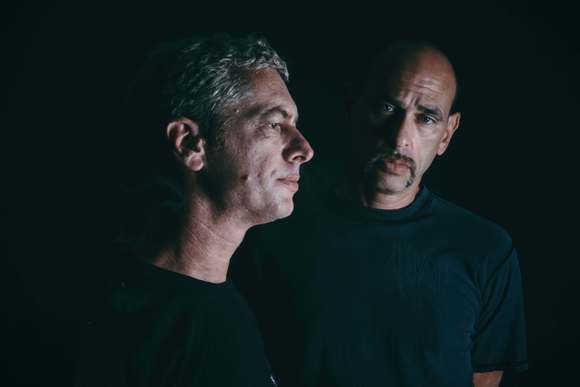 The music is beat-driven and dirty, and shies away neither from experimental nor pop. It attacks all senses with relentless sound textures, sequencer-like beats, and guitar samples. Underneath the apparent simplicity of their hypnotic, repetitive music lies a deep, constantly evolving musicality.

The band members are influenced by a variety of artists, none of which could be traced in their sound. Although Hexenschuss believe in live instrumental performance (drums/keyboards) the approach towards the music they produce is more similar to the electronic music world. Minimalistic and repetitive trance-like phrases are very well influenced by techno music as well as alternative acts like the Fall. German Krautrockers Faust and their like were quite an influence on the sounds palette, whereas Post-Punk band Wire’s ability to compose less than two minutes long masterpieces certainly influenced the more song-based tracks.
The rhythms are complex but packed in a simple groovy beat, influenced by noise rock and sometimes prog rock. The keyboards are layered with distorted wall of sound which is still clear in definition and melody and it is played like an electric guitar set up. It avoids sequencing & sampling and is played like an analogue instrument - with effect racks that could be turned on and off and manipulated while playing. The combination of sounds can be described as mean and sweet, dark and cinematic. The noise that Hexenschuss make is usually either hypnotic psychedelic effect-soaked soundscapes wrapped around a hypnotic beat, or stripped-down but carefully structured skeletons of songs, very short, compressed and minimal - they’re not real songs, since there are no vocals on them, more like parodies or reflections about popular songwriting, usually made up of only two parts. Although their music is constructed of repetition of simple bass lines and drum beats, the foundation of their music is a good song structure.

The attitude of the duo is post-punk, meaning the music brings something new and doesn’t play an existing defined sound/genre. Hexenschuss music crosses over many genres and can attract music lovers from a wide range of styles- from dance to rock, from post-punk to general psychedelia.