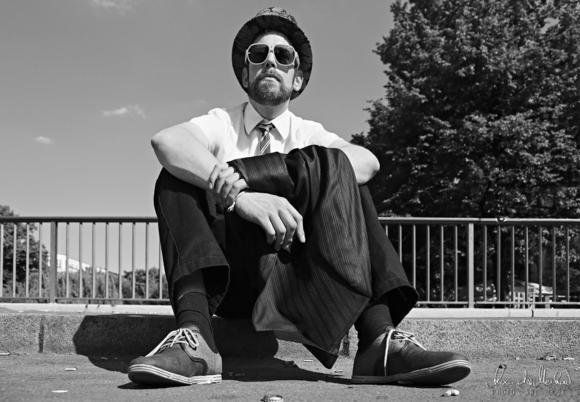 Florian Gäbel alias Herr Hobrecht  Born in a village nearby Hannover in cold November 1977 Herr Hobrecht was first influenced by his family.

His father was a fan of classical music deeply pressed on vinyl and his older brother began playing the piano in his early years. Proud to have such a musical genius inside the family Herr Hobrecht had to learn that the piano wasn’t his friend from the beginning and so he decided to better listen to music and recorded his first Mixtapes at the age of fourteen. Right after that he started to play at friends’ parties. Back then in 1992 he mixed tape recorded material with cds and Grandmaster Flash, Beastie Boys and Jesse Jeff and the Fresh Prince were inspiring examples of the early nineties hip hop.  Then in 1996 these mad years had an end and he started an apprenticeship as a cook. So that’s the way it is and it took until 2002 when he moved to Berlin and began playing with vinyls and his style changed in a direction you could call rolling and burning Soul and Funk.  „I play the music I love and I don’t need any genre, not for me and not for the music i play“, he tells anyone asking for his style. He plays what his heart and stomach tell him. Since Berlin is his home base he plays at Fuchs & Elster once in a month and has some gigs at Das Hotel. Last summer Herr Hobrecht got the Weidendom floor dancing and shaking at Fusion 2012.