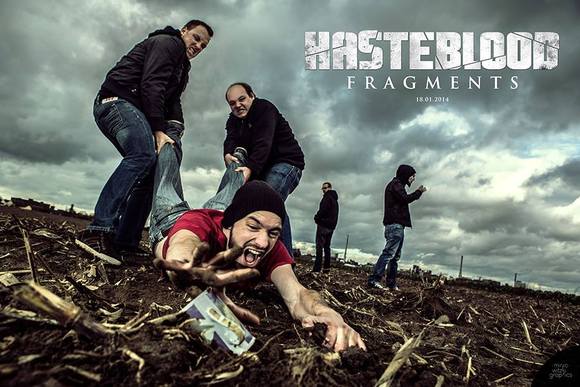 An overdose of adrenalin, injected with weight. The band's name lives up to its promise. Hasty tasty licks with face smacking riffs make their music the thing to bang your head to. Catchy and harsh vocals on spheric melodies get your groove on and carry you to the next breakdown. Vein injected metal. HASTEBLOOD

Hasteblood has been formed in 2005. Sanchez, Thomas, Matthias and Oliver first played with Matthias on the vocals but soon decided to seek a new singer because they noticed a lack of brutality in their music. They were pleased when Sven joined the band in 2006 giving HASTEBLOOD some extra deep growls.

The first shows have been played in 2007 and paved the way to a bigger thought. The MOSHROOM charity-festival has been created by HASTEBLOOD to support local establishments which help people and especially children out of misery.

Their first demo-album was recorded and mixed by thenselfes in 2008 and was called "F60.31". It became a small monster with conceptual art and music dealing with the issues of F60.31 – the borderline personality disorder.

2009 HASTEBLOOD started writing songs for the next conceptual album but had to let go of their vocalist because of some issues regarding the band only. In 2010 Sanchez "Sunny" Schwedler also left HASTEBLOOD because he was seeking for a band to play some other genres. He left a big space behind – both personally and musically. HASTEBLOOD was doomed to start the search for new members...

Those were found merely a couple of weeks later. The band got to recruit Stefan (Tide Riders, Nilaihah) as the next vocalist for HASTEBLOOD. Later in spring they found a talented bassist in Sebastian to complete the lineup and started playing shows again.
In december 2010 the released a DEMO CD containing three super smash hits of metal music with a follow up single in 2011 called "Remain my memories". Now in 2012 they are writing their next album and try to be as contagious with their music as they can be. They are hitting the studio from now on to get your ears bleeding. This will be awesome. You know. They know. We know. Go.