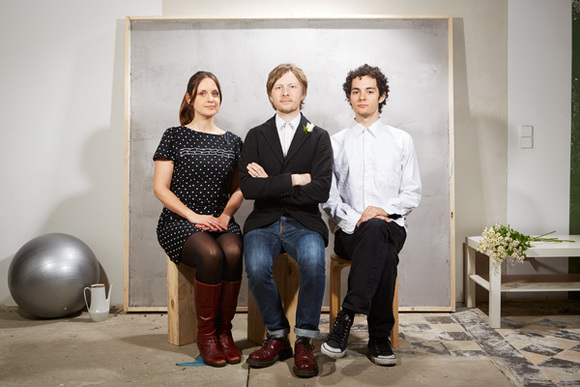 The art of travel writing is not a novel approach for pan-European
project Guidebooks.
The initial lineup of the band - featuring Ruth and Brookln Dekker
from Nottingham/Chicago acoustic duo Rue Royale and Tele
drummer Stefan Wittich – began a painstaking process of collecting
sounds, often while on the road. Shards of glitched noise, synth and
sub-bass burblings were stitched into a warm sonic rug, cut with
roomy live beats, free-falling Tremolo guitars and bold vocal
melodies.
Guidebooks soon developed an abstract but innovative method of
collaboration- finding textures, samples and suggestions of music in
sounds that they variously collected whilst playing and touring in
different countries and different spaces & times. Playing live now as
a three piece, the band established a playful, scrap book type
mentality and a sonic home for the fledging tunes.
Cut to 2013 and the work of Guidebooks was noticed by Soundcloud
who awarded them a Fellowship and helped the band to gather
samples from their huge worldwide community. Sounds poured in
from many unlikely places and sources and the 2nd EP “From where
I'm standing” began to take shape. Samples submitted were as
diverse as birdsong from South America, fuzzy recordings of choir
rehearsals from England and canal construction noise from
Malaysia. It proved an overwhelming but ultimately inspiring
backdrop for the group's songwriting and the pieces became an ode
to perspective and the ability of a single sound to take a listener to
somewhere far away. Guidebooks played lyrically with themes of
distance, separation and longing over this patchwork of sonic
polaroids. Soundcloud proclaimed it a huge success with the band
amassing almost 15,000 Soundcloud followers and coining the
phrase “being in a band with everyone”. The Soundcloud page for the
project features “making-of” tracks which show exactly how the
sounds were added together to create the finished tracks and shows
afresh the Guidebooks' determination to rethink the often purely
promotional nature of the internet for bands and writers.
Some have seen an obvious comparison with boundary-breakers
such as Sufjan Stevens but electronic pioneers Mount Kimbie and
Shigeto are also pins in the map. Likewise, classic free spirits Dylan
and Van Morrison (who’s name checked in the song “Reach Out”) are
cited alongside influences.
Paul says: “We’ve been hugely inspired by the forward-thinking
nature of current electronic music. With Guidebooks we’re bringing
our guitar-band background to the table and letting the likes of Mount
Kimbie inspire us into new shapes – without the fear of making
mistakes or trying to play to preconceived rules.” We're like the folk
writers who left our guitars on the bus and had to make music with
new electronic tools. We feel stretched, but very excited and inspired.
As the touring schedule of Rue Royale grew more demanding, Ruth
and Brookln stepped away from playing live with Guidebooks in early
2014. Berlin based singer and writer Hannah Permanetter (Dear
Henry Bliss) jumped on board to fill their shoes and the band began a
new and industrious phase preparing for live shows.
With new recordings already begun and touring plans afoot, 2014
looks set to be an exciting year for the band.