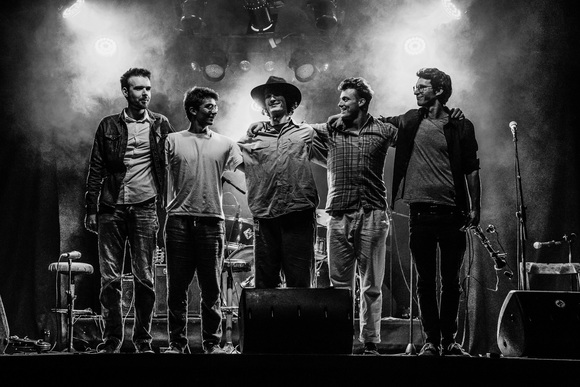 In the summer of 2020, five perspective and highly trained young musicians from different music backgrounds were joined by idea from Nejc, to form a band with a strong focus on traditional Slovenian music and traditional music from the Balkan Peninsula.

Nejc, being a classicaly trained accordion player and jazz trained piano player, was fascinated by movies of French film director of Romani ethnicity Tony Gatlif, which portay mostly Romani musicians, strongly influenced by traditional music of the Balkan Peninsula. Nejc connected with his brother Luka, one of the most sucessful percussion players of the young generation and invited Benjamin, Tomaž and Gal as additional members. Benjamin is classicaly trained guitarist, who has devoted last years to folk music (especially turkish) and switched to playing 12 string acoustic guitar. He is also a folk violin player. Tomaž and Gal are predominantly jazz musicians. Tomaž as a trained clarinet player has a lot of professional experience playing in swing, traditional and jazz bands (Balkan Boys, Ansambel Saša Avsenika), while Gal (jazz trained bass player and clasically trained cello player) made a sucessful solo jazz debut project (Bratovščina sinjega Goloba) in the summer of 2019. A band has been made under name Gugutke.

The main idea of the project was not to create another jazz project with a small traditional influence, but the other way around. Instead, Gugutke's path goes towards a back-to-the-routes traditional music band, which would originally depict the distinct rural, original sound of different spots in the Balkan Peninsula (including more modern and energetic music from today's balkan romani weddings), with some additional jazz and experimental influence.