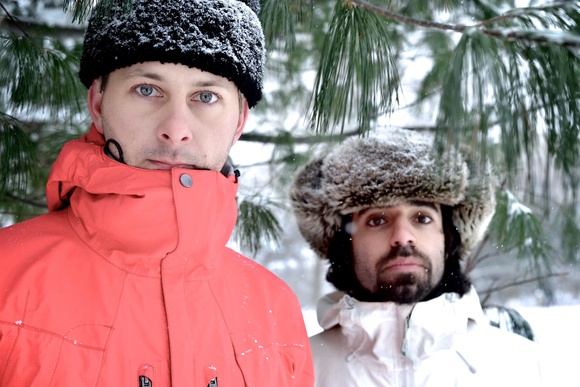 Graph Rabbit is an ambient-acoustic-pop duo hailing from New York City and were recently signed to Butterscotch Records.

Snowblind, the debut release from the Brooklyn-based duo of artist/composer Austin Donohue and experimental pianist Shy Kedmi is a deftly nuanced album, sweepingly cinematic at times and hauntingly minimalist at others. Since its release as catalog #001 on the newly-formed Butterscotch Records, Graph Rabbit has played Snowblind front-to-back at over 200 shows throughout the US and Canada, including NXNE, SXSW, and a command performance at DC’s Kennedy Center. The dreamy yet intensely focused live show has earned the band a passionate and loyal fanbase. The record has seen airplay on the BBC6 in the UK, and found itself on the CMJ charts nearly a year after its release.

Snowblind follows an unnamed character through a loose-knit narrative. This character wanders through a surreal, minimalist snowscape, falls in and out of sleep, follows deceptive birds, argues with a river and eventually surrenders to the silence of snowfall. The production on Snowblind is minimal – one finger picked guitar, one curiously small analog synth (known as a Pocket Piano) and Donohue’s singularly beautiful voice send it all soaring, with the eerie rattle of sleigh bells, melodic metallophone, and an Estonian handbell ensemble lacing the songs with unexpected tuned metal textures.

“Performing the album live front-to-back with no computers is a risk but we wanted to take it,” explains Kedmi. “It’s the only way we can really bring the world we’ve created to our audience,” Donohue adds. In addition, the band has created a video backdrop to accompany their live show, which allows them to take advantage of performing at gallery spaces and theaters. The combination of music and video takes the live show to a whole new level that speaks to Donohue’s background as a filmmaker.

2013 finished with a collaboration between Graph Rabbit, label-mate Blurry and producer Allen Farmelo on a cover of Pink Floyd’s “Comfortably Numb” (BSR007). Shortly thereafter Graph Rabbit collaborated with another label-mate, Mikael Jorgensen (of Wilco), on a dreamy cover of Spacemen 3’s “Ode to Street Hassle.” 2014 started with a tour of the Pacific Northwest and West Coast where the band continued to perform Snowblind for new audiences. as well as a return visit to the SXSW Music Festival. Work on their next LP due out later this year is already underway.