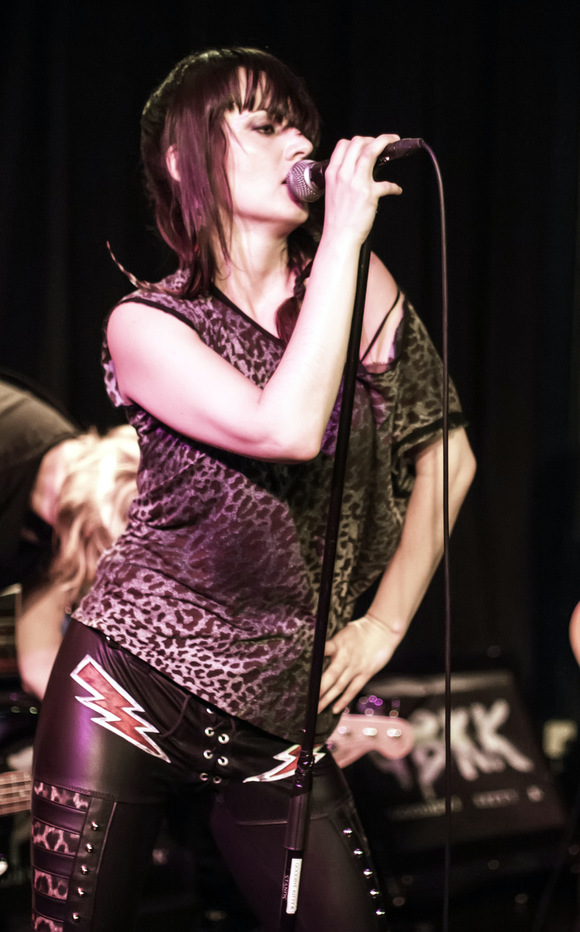 Latest Review of our Live Show: http://www.steffenjungersen.dk/kat-power - Translated:
The following is hardly so much classified as a review, as it must be cataloged in experiences under "D" - for "I'll be Damned!"
My memory takes occasionally worrying similarities with a plastic bag that over a longer period has been used to transport steel brushes , but I am pretty sure that I have never experienced this.
Namely, that a band during the first two tracks sent names like the Ramones, Talking Heads, Patti Smith, The White Stripes, Television and The Runaways - occasionally added splash of the legendary Motown girl groups - down on the block.
But it worked for Goodbye Kitty K, and in particular singer Kat Van Ville - a star is born here , believe me! - Saturday night. It took place at High Voltage in Copenhagen, but with eyes closed for a moment a projector on the inside of the eyelids started showing one gritty documentary from New York's dirty boulevards there about 1978-'79.
Here, 35 years later, this mix of punk, new wave and basic glam rock is, however, something as rare as relatively original. Not least thanks to Kat, that on stage seems to be doing one long exorcism of demons who once had to dance in just her universe.
It should be scary if it all were not just because it is an immersive experience with a front figure who really dares to reach out and give themselves on stage.
The rest of the band - guitarist Hick Corea, drummer Wolfman and bassist Peter Hehlmann - know the drill and play tight and efficient. Here are indeed no - as in NO - detours.
Now I allow myself the luxury it is to be honest and admit that I simply do not yet know the tracks well enough to come up with further analysis.
But this much is certain: Goodbye Kitty K you must keep an eye on, and Kat Van Ville is as mentioned, a born star.

GOODBYE KITTY K is a female fronted high octane rock band delivering a raw sound called Scrap Rock!!
Kat van Ville - part Patti Smith, part Jim Morrison – on her explosive vocal, together with her brother Wolfman on drums and cowbell and their great friends Hoff on the fat strings and Hick Corea on guitar have all prepared the ammo for a steam engine show!!
Since the first live show in 2010 GOODBYE KITTY K plays shows to a steadily growing crowd and supporting big Danish acts such as D-A-D and Supercharger.
Summer 2013 was marked with GOODBYE KITTY K's release of their debut album "SCRAPPED" on iTunes and Amazon as well as singles on streaming websites followed by live shows to an amazing crowd!!

The BAND NAME:
GOODBYE KITTY K is the memory of the once fallen girl Kitty K.
She lived her life in a blurry ecstasy of fear, selfdisrespect and lust - blindly looking for love in beds in the loveless corners of life. Low and nasty she hit rock bottom at the end of the circle of pain. Instead of death, she found her long lost strength and gained the power to turn it all around. She saw it, she felt it and then she said Goodbye to her old self.
GOODBYE KITTY K.