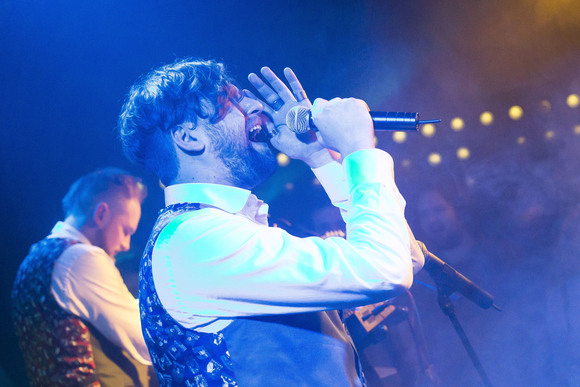 Try to pigeonhole Golden Parazyth and you'll probably end up in a mental hospital, clutching a copy of music encyclopedia and promising yourself you'll never put a pen to paper again.

Not a typical electronic music duo (although they draw crowds
bigger than most major Lithuanian DJs), not a group of rock musicians (althought
they can pull off a mean acoustic version of any of their hits), a singing laptop
maestro Giedrius Širka (GP) and a pioneering synth guru Aurimas Vilkišius (K@)
operate within a field of their own.

“They're really onto something” - that was how Adam Anderson (a half of the well
known British duo Hurts) described Golden Parazyth after witnessing the band's
performance. The story goes that in 2013 both Hurts and Baltics music experts
voted these Lithuanians the most worthy to warm up for the British stars during
their November trek of Estonia, Latvia and Lithuania. No wonder – various
incarnations of Golden Parazyth have been around since 2005, watching the fan
base grow steadily and constantly evolving into a musical proposition, which is
now attractive both to highbrow electronica specialists and drunken rock festival
goers.

Emerging practically out of nowhere in 2005, a year later Golden Parazyth
released his debut album Apartment of Steel which is now considered a cult
classic. Underground fans hailed it as best electronic album of the decade. Special
themed parties and unconventional songwriting didn't go unnoticed and soon he
(GP) was taking calls from major Lithuanian labels. Sophomore albums All The
Truth About Blue Monkeys and Long Way Home increased the artists radio
exposure, pleased hip crowds and brought new listeners to table.

2013 brought the band more memorable moments than you can shake a stick at -
like playing a solo gig for thousands of happy revellers at the Cathedral Square in
Vilnius, being selected to perform a sold-out arena show alongside Lana Del Ray,
to warm up for the British stars Hurts during their tour November trek of Estonia,
Latvia and Lithuania. or putting on a wild and sweaty performance at Europavox
festival in France. Killing the dance floor with synthetic beats, looped guitar
samples and uplifting vocals, GP (Giedrius Širka) and K@ (Aurimas Vilkišius) are now on the watch list of quite a few festivals in the region. Not bad for a band that's truly difficult to describe. "Each day is like a new song, which requires the best performance“, they finally offer.
Erm, thank you very much. Nevertheless, you could do way worse than check out
their albums and EPs. Laughing in the face of good grammar, Golden Parazyth
remain one of the most interesting duo of Lithuanian scene.

The guys have already touring clubs and festivals in France, England, Germany,
Ireland, Luxembourg as well as countries of our region – Poland, Estonia and
Latvia. Sharing stage with American Lana Del Ray, American-Chilean Nicolas Jaar,
British bands Hurts, Underworld, We Have Band and Touch & Go, Icelandic bands
FM Belfast and Gus Gus at various events in Lithuania might be a humbling
experience.