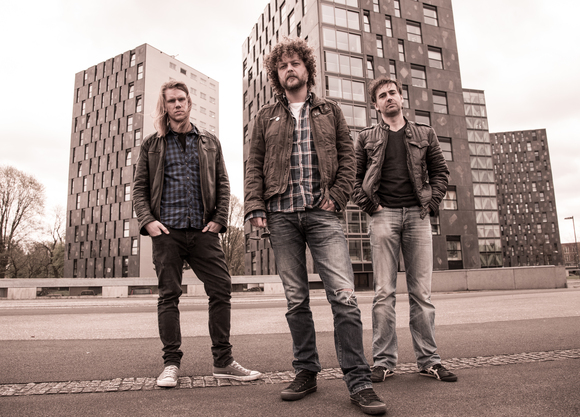 Gingerpig was founded in 2009 by Boudewijn Bonebakker, previously know for his work with Gorefest and whom following graduated at the conservatory with the music of Purcell and Bach.

It characterizes the versatility of the band that went through turbulent times but came back out cleansed. The quartet became a trio and rediscovered itself. With the new album Hidden From View, the band unleashed and forged into a compact collective that is ready for the limelight.

Hidden From View
In 2011 Gingerpig surprised the music world with The Ways Of The Gingerpig. A wayward mixture of seventies-rock, blues, fusion and post-metal. The record garnered excellent reviews but for many the ways of the Gingerpig seemed almost too versatile. A secret tip among connoisseurs but difficult to label. The title of the new album seems to be a direct reference to that.

Restriction means freedom
When keyboard player Jarno in 2012 decided to call it quits so to venture into the wide world, the band stood at a turning point: continue as a three-piece or look for a replacement keyboard player. After recording the song 'Ugly Heart' as a trio (April 2012) it was decided to move onwards without a keyboard player. The band went back to the basics and started working on more rock- and song-oriented material. Hidden From View is the result: the nine songs sound catchy on the album and stand firmly upright live. The obvious limitations of working as a three-piece also meant freedom. Freedom to play pounding rock (like in 'Nothing') and to leave the sound-experiment for what it is if the song has no need for it. Founder and singer/guitarist Boudewijn Bonebakker: "We're past the jams, more or less outgrew them."

Future
The band has become a tighter collective that plays even tighter. Gingerpig is ready to capture its self found essence to a broader audience. Bonebakker articulates the mission as follows: "Make the love for music audible, and that in the best achievable way."