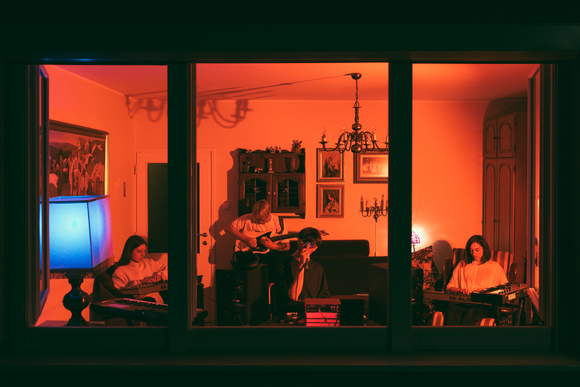 “The ideal soundtrack for lazing about or a late-night walk home from the club.” Goran Kompoš​, Mladina Magazine "... but what most characterizes the music of the home electronic quartet are the heavily processed vocals that seem to be constantly referencing Cher and her hit Believe." Gregor Kocijančič, Mladina Magazine "For some, a trip which you experience while driving on an empty highway in the middle of the night.

FUTURSKI form a palette of synthetic colours, driven by melancholic vocal melodies, dreamy
synths and guitars. Their performance ranges from gentle, almost heartbreaking passages, to a
powerful wall of sound, which is almost entirely produced live, on the spot. What most
characterizes the music of this electronic quartet are heavily processed vocals that the male
half of the band ingeniously manipulates.

In June 2019 they released the second EP “Emotional Tourist,” bringing the freshness of
unburdened synth sounds to the local music scene. It puts the listener in an epic and distinctly
nostalgic mood and spices it up with bold bass lines.

In 2018 they were selected as one of the INES talents, which opened the door for them to
perform at a number of Europe’s showcase festivals, such as Liverpool Sound City (UK), Spring
Break festival (Poland) and Waves Vienna (Austria). In addition, they played shows like MENT
Ljubljana (Slovenia), INmusic festival (Croatia) and many more.

Their music video Ivone, produced by Tomaž Šantl and Črtomir Just, received the award for the
best music video at Festival Tresk, given by Radio Student.

In June 2019, as part of the residency programme Dvocikel and KAOS Festival of Contemporary
Collage, FUTURSKI and visual artist Tatjana Kotnik created a live collage and music performance.
They premiered it at Layerjeva hiša in Kranj and at Klub rečnih kapitanov in Ljubljana, on Ljubljanica
river.