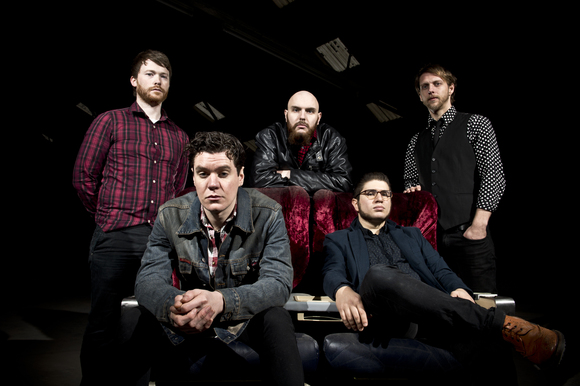 Fox Jaw are a modern band with an old soul.

Producing a trend shaking, majestic deep growl, which swaggers from the terrific to the sublime. A band that usually err on the side of darkness, but always keeping it sweet and melodic with an honest collection of dark pop songs. Critics praising them as "True hidden gems", "A seductively gloomy sound in a league of its own ... will both mystify and satisfy” (State.ie).

Producing a trend shaking, majestic deep growl, which swaggers from the terrific to the sublime. A band that usually err on the side of darkness, but always keeping it sweet and melodic with an honest collection of dark pop songs. Critics praising them as "True hidden gems", "A seductively gloomy sound in a league of its own ... will both mystify and satisfy” (State.ie).

Formerly Fox Jaw Bounty Hunters, Fox Jaw are a band filled to the brim with new beginnings. Aside from a new abbreviated name, they are armed to the teeth with an armada of new material, locked & loaded with new recruits, and equipped with a sagacious mind for the road ahead. This isn’t a band reinventing themselves; this is plain and simple evolution. And now, after a year in hiding, writing, recording & honing their craft, the storm is brewed and ready for serving.

After their sleazy blues ballad 'Kerosene' that was released in February, raised many eyebrows in the Irish music industry, as a band proving themselves with an ever expanding sound, 'Hijack' is set to turn many a head, as a foot stomping pounce to the other end of the rock and roll spectrum. ‘Hijack’ is out on Friday 30th May and is the second single to be taken from their upcoming sophomore album, 'Ghost's Parade', recorded with producer Dave 'Skippy' Christophers (Josh Ritter, Whipping Boy, Mundy) & engineer Owen Lewis (Flogging Molly, Snow Patrol, REM), and mastered at WAV Mastering by Richard Dowling (David Bowie, Foo Fighters, Interpol). The new album is due for release in September 2014.

The band’s first single from the upcoming album 'Kerosene' gained great critical appraise from the likes of Tony Clayton-Lea (The Irish Times), Nialler9 and Hot Press to name but a few. It received a great amount of airplay on Irish and UK radio to an estimated listenership of over 200,000+ in just a little over 2 months. And with its award winning music video created a great online stir amongst critics, fans and bloggers. The video was co-created with Blind Boy Boatclub of The Rubberbandits and starred Richard Lynch & Kevin Kiely Jnr. (World War Z, The Dark Knight Rises).

Fox Jaw’s next single 'Hijack' is due out at the end of May, followed by a string of summer dates and festival slots. The track has already been picked up by TV Tattoo celebrity, Ami James (Miami Ink / NY Ink) as the official backing track for the promotional videos of the opening of his new shop in Cork: Love Hate Social Club.

A simple background check on the band reveals, that the guys are one of the hardest working bands in the country. Releasing their debut album 'The Devil In Music' in 2011, and playing close to 100 shows within 24 months, across Ireland, the UK & Canada (80 of those shows were within the first 10 months). With many festival appearances including Indie Week (Toronto), Glasgowbury Festival, Vantastival, Arthur's Day, Knockanstockan and even being added to the Main Stage at Indiependence Festival to share the boards with the like of Ash, Editors & Therapy?. Going from strength to strength, featuring on a Becks Vier TV advertising campaign, a flip cover of Hot Press, and receiving an 'Album Of The Year' Award from Independent UK music website, The Underclassed. There's a strong chance you've come across this band before, without even realising!

They've shared the stage with such acts as:  Against Me!, Therapy?, And So I Watch You From Afar, The Redneck Manifesto, Jape, Hayseed Dixie, Fight Like Apes, Calvin Harris, The Feeling & more.