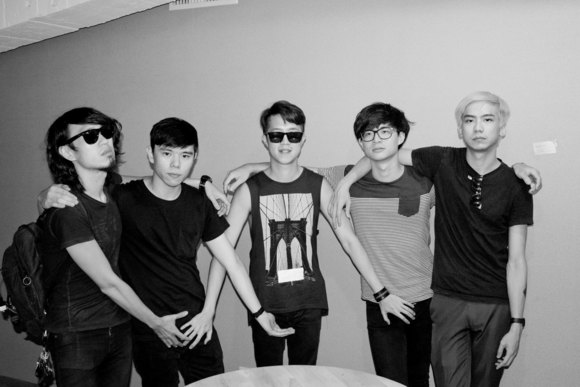 About three years ago, a certain amount of buzz sprung up around the band Macbeth, a four-piece of local college kids that was a bit of a throwback to the cool sounds of late ’70s synth rock.

Though a bunch of songs included an overlay of postrock guitar fuzz, a major element of the sound was channeling bands like Joy Division, the Doors and British new wave, and they succeeded because they managed to bring back driving, danceable rhythms within rock music as well as urgent lyrics sung from the diaphragm and at the audience. The singers still protected their stony faces behind black sunglasses, but the music was not afraid to be engaging. It was a very different species from the bedroom pop and shoegaze soundtrack music favored in the main Taipei livehouses, but somehow Macbeth managed to appeal to those crowds too. The band played several of the bigger festivals and showcases in 2010 (Megaport, a big Free Tibet concert thrown by The Wall, and a “Next Big Thing” show at Legacy), contributed a song to The Golden Horse film festival as a theme for the rock ‘n roll film program, and were nominated Best New Band in a competition by the now-defunct Government Information Office.

In 2013, half of Macbeth’s members were stolen away by compulsory military service, so the other two guys needed a new band. The military is one reason that Taipei’s young band scene is a swirling soup of free-floating musicians, where it is not strange for decent players to have two or three groups at the same time. The other reason is that there is almost no way to make money at music in a small market where no one buys CDs and a typical gig nets a band only two or three thousand New Taiwan dollars. So band members all have parallel lives in school or working jobs in bars, shops and sometimes even offices. This is a music scene constantly diced up by the twin cuisinarts of military service and Real Life. Things stay pretty fluid.

So within this mix, somewhere between a year and a year and a half ago, the group Formosa Romance began to coalesce. Coming from Macbeth, drummer Ian Chen and Howie Yu , who moved from guitar to bass, began jamming with two other guitarists, Eason Feng from the band Vampire Watching Television, and Wave Chien from Moon Police. Early on, they had a lead singer who gave them the band name Formosa Romance, but he quickly moved on, leaving behind little more than the name, which sounds like a forgotten black-and-white movie title.

“In Chinese, the band name sounds really awesome,” said Yu, who was genuinely enthusiastic about the cool-soundingness of Baodao Luomansi.

In English however, Formosa Romance is just cheesy, especially as a band name. I did actually mention this, though suggesting they change their name change was a tad awkward given the upcoming CD release and September-long tour of Taipei.

The name aside, Formosa Romance is a good band. Go out and see them. Expect the same good instincts from Macbeth, but in a different package. Where Macbeth is cool, Formosa Romance is hot. They are a little more free with their energy, a little more rowdy. The music is riff driven but still built on the framework of the three-chord, three-minute rock song. It revs a little louder, like a motor scooter with a trick muffler.

“We wanted to start a band with a double guitar sound like the Strokes or Black Rebel Motorcycle Club,” said Yu. And that worked as a starter, but then things went in a slightly different direction. To fill the lead singer’s role, Yu asked his boss at the Cat’s Pajamas hostel, Bix Song , an androgynous scenester who has been hanging around both rock shows and alternative dance parties for years. Bix starts telling me that for singers, he likes Christina Aguilera and blues legend Etta James, before he remembers he is supposed to be fronting a rock band and ditches the line of gay-crush divas. He moderates with Patty Smith, then finally reiterates a common interest in Black Rebel Motorcycle Club. But as a frontman, he knows how to make a show of himself and fills the slot well, even though in many ways he is still learning to sing.

“With me, we become like ’90s gay rock,” jokes Bix. “We are four and a half men.” For their homemade black-and-white publicity photo, the group stands rather woodenly, with each band member reaching towards the crotches of the guys beside him.

It’s a bit of sophomoric horseplay. Refreshingly, sexuality is a non-issue in Formosa Romance, and Yu says they didn’t even really bother to try to understand Bix’s English song lyrics until they were in the studio recording the album. Mostly, they are just five guys who want to play rock, and they are doing it simply because that is what they want to do.

As some of you are aware, I’m a diehard Detroit Tigers baseball fan. Recent years have been kind - they are supremely talented, they play well, and by all accounts, it is a group of swell guys. But they just can’t win the Big Game. Every year there are mutterings (even from their own manager): they need more swagger.

In the late 80’s / early 90’s, the Detroit Pistons basketball team were known as the Bad Boys. They played aggressively and went on to win a few championships, killing off the giants of the league along the way: the Boston Celtics, Michael Jordan’s Chicago Bulls, and the LA Lakers.

The USA World Baseball Classic team roster is always filled with talented, top-grade marketable players. But despite their winning smiles, they never play to their potential. They lose.

See where I’m going with this?

So what are we going to get here with Formosa Romance, the equivalent of a Taiwanese indie rock supergroup? Pretty posers or real rockers?

Well, thank whatever god or gods are on the skies or holes in the ground, these guys come out swinging. If they let up it, it seems more as a step back to assess the damage and give a smirk before resuming the pummeling.

Their songs and this band, how shall we say... they have swagger.

Propelled by thick, prominent bass lines, burning guitars, and charismatic vocals, Formosa Romance is the rare superband that actually fits together and rocks.

I remember guitarist Ethan from back with Rabbit Is Rich, particularly his choppy chords and wild playing, and have always been intrigued to follow his projects. Vampire Watching Television was a fun kick. Macbeth established themselves quickly as a go-to band. In a switch from playing guitar and performing vocals in Macbeth, Howie now tackles the bass and with the way he’s manhandling it, it would appear he’s won over his new instrument. Check out his manic riffing, with Sweet Little Thing, Good Deeds, and When I Walk In the Room being Exhibits A, B, & C.

Rounding out the group are guitarist Huang Qin-Zhong of Flux, drummer Ian Chen, and vocalist Bixx Song. While Howie’s bass makes the most immediate impression, I’ve come to admire Ian’s drum work more with each listen - it’s little things like the fills on Skin to his steady presence throughout, especially the driving energy of Good Deeds. And for guitar, various complementary riffs pop out, adding to the depth. The aforementioned Good Deeds has a repeating four note phrase at the breakdown at the 2:12 mark that totally sets up the furious race to the end. Nice.

Vocalist Bixx has gone on the record saying he’s learning as he goes, but he’s a quick study. This is not me simply praising a friend, as there is ample evidence throughout the album to prove his skill. He can deliver a wealth of expression. Aside from carrying a tune, we get treated to mean bites, raspy stare-downs, menacing whispers, and deep Nick Cave flourishes. Oh, and then there are the saucy lyrics:

"I cover your face with my basic instinct (Get You)"

The dominant, darker moods of the album, highlighted by tracks like Gone and Done, shift by the end of the disc, beginning with the stompy beat of Get You and culminating in the Strokes-y finale, the uplifting Way Out. It may well be a deliberate “radio-friendly” tune, but it works without breaking stride or confusing the overall aesthetic. Perfectly executed, they pull off a happy ending. And we all like those, yes?

Swagger. It’s naming your debut album The Best Of. It’s equal parts humor and bravado. It’s knowing you’re good and knowing you can’t take yourself so seriously, and then going out and being awesome anyway. It’s the fists of fury of the album’s opener Nobody. It’s looking someone straight in the eye and spilling your heart. It’s this band and this album. It’s the real deal.