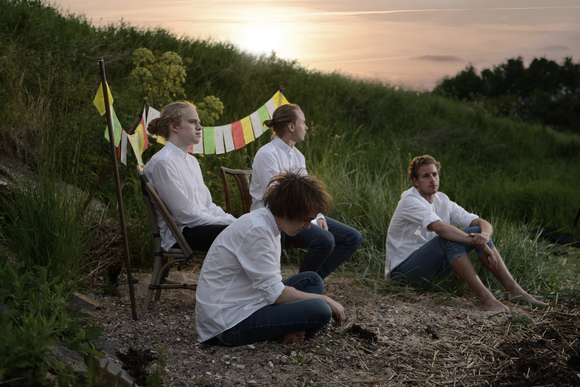 Flod is a Danish act, which can be quite difficult to define.

At the heart of their music lies a feeling of moody, yet hopeful melancholy, directly connected to the bandname which means 'river'. Like a colourful abstract painting, Flod combines the majestic sound of classical instruments with the atmosphere of electronic music, the longing melancholy of post rock and the graceful melodies of folk music. Playfully exploring these contrasts, they create a universe of complex and interesting arrangements, moving between fragile, elegant passages and exploding, powerful crescendos!

’Kurs’ is the name of Flod’s debut album, and is a 30-minute long grandiose narrative, consisting of four consecutive tracks, Joki, Lumi, Ríu and Paka. The debut has been on its way for a long time, and in the process of writing ‘Kurs’, Flod have said goodbye to a band member, thus drawing a line between what was, and what is to come.

The visual universe surrounding and permeating ‘Kurs’ is created by Julie Torpegaard, is inspired by the dramatic paintings of the 19th century, mixed with traditional Japanese drawing, which makes ‘Kurs’ a unique experience for both eyes and ears!

Flod, currently a seven-piece band in live context, premiered ‘Kurs’ to the public at SPOT- Festival 2013, followed by several concerts around the country. The single and opening track, ‘Joki’, was released online on August 4th, and has already received praising words, from blogs and audience alike. ’Kurs’ in its whole was released as an LP and online on September 20th, 2013. Following the release, Flod played at Reeperbahn Festival in Hamburg.

The year of 2014 is dedicated to writing new material, with a few shows here and there. Hopefully the late autumn will see new tunes from the young danes of the river!