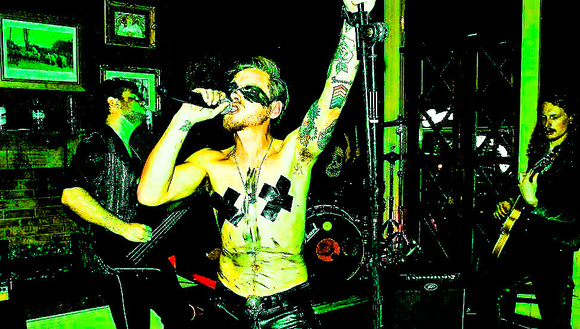 The same week as their first ever gig in 2014, a support slot for Fat White Family, Fleckt Pets' first DIY show in Middlesbrough was shutdown mid-set set by armed police.

It can only be assumed that the powers that be got wind of the iconoclastic, subversive and downright strange punk party that was about to be exposed to the public.

Their energetic live shows, punctuated by frontman Tom Barber's wanderings through the crowd, into toilets, climbing up walls and wherever else he can get has earned them a strong live reputation, with NARC Magazine declaring: "They've built a fearsome reputation for being one of the most energetic and unrestrained garage punk bands around."

Their live reputation and debut EP 'This is our punk' bagged them a spot at Long Division Festival in 2015, a gig at the iconic punk night Garageland in Camden and a support slot with The Rezillos in December. The band also support The Membranes in March this year.

'War Cry', Fleckt Pets' second EP is out at the end of February (press release below).

"The kind of songs that will make you want to stand on your desk during the math test and dance. It’s eccentric, dark and political– garage punk at its best," Heatwave say of the new 'War Cry' EP.

Fenders and fuzz dominate this dark but hooky record with trashy riffs hinting at funk, soul, garage and a smudge of country rock all harnessed by basic punk rock values and a have-fun-or-don't-bother mentality. Politics and personal stories merge on this record as frontman Tom Barber spits, snarls and screams brutal honesty, dragging you into his troubled world of booze, violence and frustration.

The front cover of the album features the warmonger Tony Blair with Fleckt Pets bassist Calum Piercy as a child. This is a real photograph taken in Calum's hometown (and Tony Blair's former constituency) Sedgefield.

Fleckt Pets are best experienced live, so the music for the EP was recorded live in a single room by David Curle at First Avenue Studios in Newcastle-upon-Tyne, England, with vocals added afterwards.