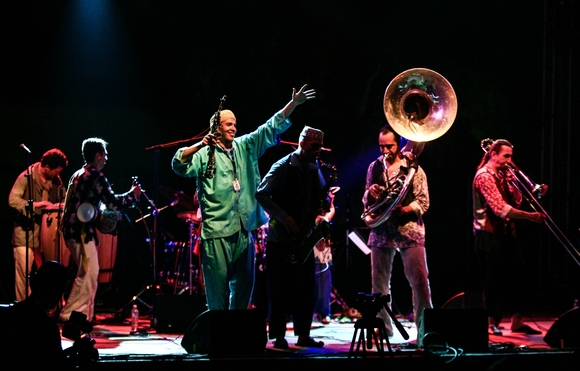 This atypical and original band, born in 2005 and living in France, plays North African music by blending skilfully brasses, traditional percussions, Arabo-Berber, Afro-Cuban, Latin and Jazz sounds.
From the street to the stage there is just one step for this colourful orchestra which offers a very festive and generous show!

Fanfarai emerged in 2005 under the direction of Samir Inal. After creating Ziyara a traditional Algerian street band in 2000 he met with musicians coming from jazz and salsa bands and decided to readapt with them the traditional and popular repertoire for a brass band. FANFARAI goes along the same line as the tradition of these street orchestras, called "Idbalen" or "Zernadjia" that animated rituals and feasts in Algeria from the beginning of the century till the 1970's. Idbalen was common in the Berber region, Algiers and its surroundings. These bands used to perform in public squares, streets and mausoleums during the feast of local saints. Inseparable from festive events, these street musicians used Tbel (drums), Ghaita (flute) and Tbilette (small drum or tambourine), Derbouka, Guellal and Kerkabou according to their region. Fanfarai combined the saxophones, congas, trumpets, trombone, drums or the tuba to these traditionnal instruments, readapted the repertoire for all these instruments and introduced - naturally -Afro-Cuban, Salsa, Latin and jazz influences. The North African music has never been played this way (with a brass band) and this is what makes Fanfarai so original and the project so successful.
The music of Fanfarai is a cheerful combination that is as interesting as the diversity of cultures and trajectories of the musicians themselves. French, North African and Franco-North African musicians bring their energy and talent together and keep sharing their own particular musical heritage with all the other members of the band.
The baseline of the repertoire of Fanfarai is Algerian and Moroccan and each member of the band is free to bring his own influences onto it.
Fanfarai succeeds on each performance - in the streets or on stages - to carry its audience away beyond ethnic descent or nationality, towards territories of tolerance, discovery and pleasure.
Tani the second of the band was released on May 2013 and gives a good view of their creativity with personal compositions and new reggae and funk influences.
The leitmotiv of the band is : " to learne from one another and to share with all "