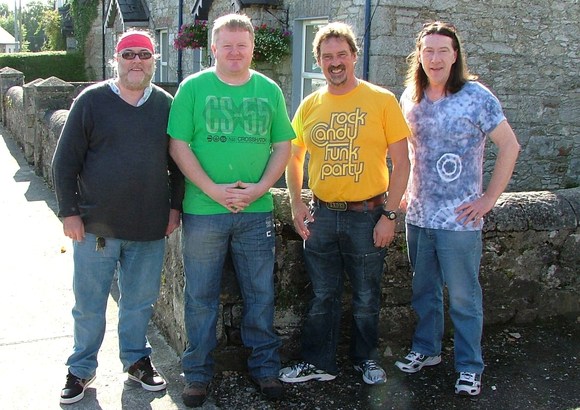 Fair Exchange are a four piece band from South Tipperary in Southern Ireland.

Originally formed in 1979, the band's style of music is best described as "Hyberno-Reggae" . To date they have released 4 singles, (on both CD and as downloads) and they are currently recording their debut album which, they hope to release in late 2014

Fair Exchange were formed in Cahir, Co Tipperary in 1979 by Charlie O Neill, Johnny Casey, Joe Shine and Anthony Fitzpatrick. Becoming a 5 piece in early 1980, the band played extensively in clubs and pubs around the South East for much of the next 3 and a half years. However, disillusioned with the local gig circuit, and lack of success, the band decided on taking a “short break” toward the end of 1983.
This “short break” ended 23 years later, when in the spring of 2006, the quintet reformed to write, record and release a CD single to commemorate the 20th anniversary of the Chernobyl Nuclear Disaster. The double A sided single “Hope/Beach Party” was released on April 26th 2006 and despite receiving little or no airplay, spent 3 weeks in IRMA Irish Top 50, peaking at number 43.
Toward the end of 2010 two of the quintet finally called it a day with Fair Exchange, though the remaining 3 founding members, O Neill, Casey and Shine, still continued to perform locally, on an occasional basis, together. In early 2012 bass player Tom Grace, joined the band and once again Fair Exchange returned to the live gigging circuit.
In April of 2013 Fair Exchange went back into the studio to record a couple of songs written by guitarist, Johnny Casey. The first of those “Bob Marley On My MP3” was released as a limited edition CD single, and on download, in June 2013. This single, which received considerable airplay on independent radio stations, went on to win the band a slot performing at the prestigious Castle Palooza Festival that August. A video for the song, recorded entirely on an iphone, has also received over 4,000 views on YouTube. A Follow up single “Beetle Camper Van” was released in October 2013, and once again it received great support locally and features “Vernon” an original 1970’s Beetle Camper Van in the accompanying video. The band are currently working on their debut album, which they hope to release later this year.
For more information check out www.fairexchange.ie and/or www.johnnycasey.ie or www.facebook.com/fairexchange1979 or contact at johnnycasey59@gmail.com