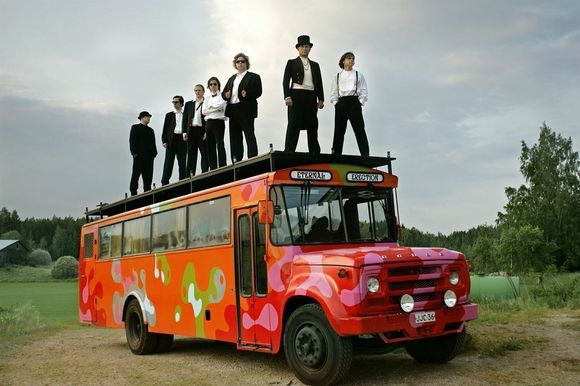 Eternal Erection celebrates their 20 years of funk by releasing their sixth studio album in autumn 2014!

The album is made of hybrid funk, electric beats, rock and progressive tunes and it's produced by Kalle Koivisto (Kemopetrol).

Anniversary year is full of love and music: new website, new music, new album, new show costumes, new incredible live shows! Eternal Erection still promises to do their best to bring joy and dance to all around the universe.

Eternal Erection has a moving stage: THE FUNKY BUS!
"It’s a modern version of a Woodstock hippie bus, pimped to the max and funky as hell! It even has a stage on the roof for the band to play outdoors. It's our home, our tour bus, our backstage and our stage, all at the same time. The Funky Bus has been at several festivals including Brighton beach during The Great Escape Festival, and in the city center of Helsinki during the Eurovision Song Contest. We turn on our PA system and give you a crowd-pleasing and extraordinary show with even DJ's included".

'Fun for Finns', was the founding principle of Eternal Erection. Now Rick Lover and his cohorts have decided to share their liberating grooves with the rest of the world. Frontman Lover has charisma to go with his funkadelic figure, and his strong voice lives up to the requirements of the band's funky blend of soul, groove and pop-funk.

Eternal Erection has made five globally released albums. They have already played in many countries, from Cuba to Russia, from Brighton to Berlin. Among the highlights of their career were the warm up gigs for the famous George Clinton P-Funk Allstars, and sharing the stage with famous names including Lauri from The Rasmus and Mike Monroe of Hanoi Rocks. They have, with their wild club performances, impressed not only many festivals but also media people such as Conan O'Brien.