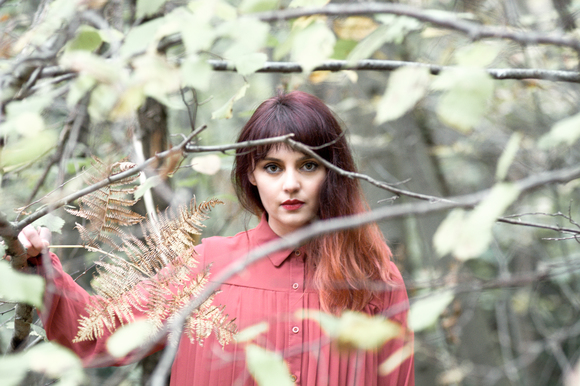 Lauretta Grechi Galeno aka Emilya ndMe is an Indie rock, Electro-Pop song writer from Genoa In love with music since an early age, Emilya ndMe initially approaches Jazz music (which she will never abandon) and Swing music.

A musical journey full of experiences such as:
Participation in the Lunezia Award as song writer at the age of 20 and musical collaborations with the world of theater since summer 2016.
The sounds are straddling Indie rock and Electro Pop music international, crushing the eye to Trip Hop, to Downtempo and Glitch. The influences are multiple and revolve around the musical experiences of Emilya ndMe like Daughter, Florence and the Machine, Metric, Garbage, Jack White, Portishead without ever forgetting the cultural background coming from genres like Jazz, Swing and Grunge Rock.
In the winter of 2018/2019 he signed with the independent Italian label Cockroach International Production for the release of the single "Snow" (correlated from official videoclip) published on 21 January 2019. A single, Snow, which anticipates the release of the first complete album soloist of the Emilya ndMe project.

Emilya ndMe says: "Snow was born on my bed: it often happens to me that memories come to mind like images, right in front of my eyes even when I don't feel like it or I don't want to think about it. They are able to tear off a sudden smile or bring tears to my eyes.
That's the day, SNOW day, that's how it went. I often fight with those images, I would like to cancel so many, never think about it again and I never won and I had to accept them, welcome them so as not to be left behind. So on that afternoon, there, I took an old diary, a pen and tried to describe those memories, to free myself. SNOW talks about my mother's last hours, when I was there beside her bed, on the other side, my sister was staring at my mom together with my family; we said goodbye on a January’s morning, the sky was cloudy and bruised with the light coming out like icy rays in the clouds. I felt myself falling into the void, not having the strength in my legs, it seemed like a nightmare, a violent pressing of unsettling events, an unheard-of pain and then a moment after, the elusive silence. It looked like the surreal snow. The snow that my mother loved so much, that taught me to live like magic when it falls, which was an intimate thing of amazement between her and her daughters, an elusive game that chases one another.
It happens that in order to live we fight, sometimes it is not enough and we pass away, it also pass those who stay because you go beyond the physicality and you stay inside a bubble for a long time and then you start living again, like when the snow falls, covers everything and there is the silence but then it melts and starts again."

"I wrote Yellow Led reflecting on my relationship with religion: a conflict is always present in me, between the religiosity that I most understand as spirituality and the rationality or material interpretation of life events.
Yet every time I find myself in danger or in painful situations, I have always sought help and strength in what is not seen, seeking contact with nature as if it were a portal between this world and another.
Yellow led talks about this experience: "no other way, no other way to avoid that knife, except through you" and more over "you know I'm blind" are phrases that lead to the language of sacred texts, the expiation of pain through something , the concept of blindness, as an inability to see God and the truth
Already in the title "Yellow led" there is the use of the metaphor of light as a search for another awareness, of another life, like something that lights up in the dark "

The video clip tells, through the cross-section of an ordinary day, what Yellow led describes. The light is present throughout the video, belongs to the reflection of the mirror on the box of memories that starts the story, in the sun between the leaves or the sunset light that shines on the water
Adult moments of solitary meditation alternate with the childish play that tears and distracts from complications, from memories and nostalgia depicted through the photo album.
The memory dimension returns with the old photo that appears floating on the water, the only surreal moment of the video, instead totally based on concrete gestures and tangible feelings. That photo is precisely the "portal" that, around a certain point, nature offers to connect this world to another that is not seen: for those who believe, in a dimension of beyond, for those who do not rely on religion, in a world of energies that envelop and connect everything and everyone between the past (photo), the present (what happens in the video’ meantime) and the future (the child

on May 12th the first album "thank you for your complaints" has been released. Valgeir Sigurðsson, known for working closely with fellow Icelander Björk, mastered the album at Greenhouse studios in Reykjavik.

In Jan 2022 she released a new single, Space and the Universe, mastered by Alex Wharton at Abbey Road studios that anticipate a new album Emilya ndme is working on. Space and the universe, composed and produced by Lauretta Galeno aka Emilya ndme during a quarantine night at the piano, is an interstellar journey of the mind that has its roots in the awareness of a state of forced closure and loneliness common to everyone, created to alleviate the lack of freedom with music: to design a new world with the imagination.
Narcis Iordache directed the videoclip telling the journey into a new dimension through space and time. The artist's vision takes shape through paper: black and white drawings form a portal on a stone wall. There are many references to the iconic German series, Dark, beloved by Emilya ndme. She pays tribute to it and its time warp chaos with this videoclip.