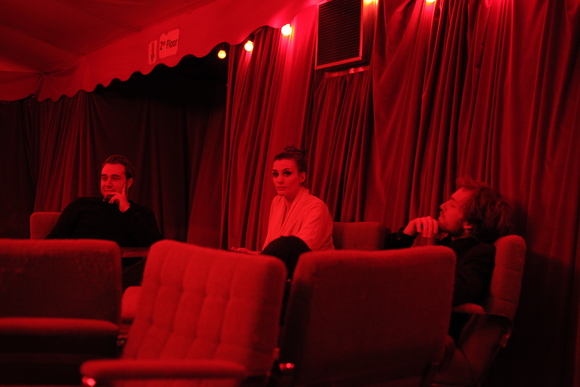 In 2011 the trio "electrorot" met on a jam session in Berlin.

Their sound experience and music vision are ranging from jazz, hip-hop and electro up to rock and metal. These influences produced experimental sessions until they decided to put all their ideas into songs rich in variety. They create their own unique sound between rough dance music and thoughtful melodies with a spherical approach.

In 2011 the electropoptrio “electrorot” met on a jam session at a club under
Berlins` S-Bahn arches for the first time. In the beginning the electronic beats
and samples of Mike Kapelle hit/push the synths, rhodes and the energetic voice
of the duo Maren Montauk. The musical experience ranging from jazz, hip-hop to
electro up to rock and metal. This influence caused in the following weeks the
experimental evenings until they decided to put all their resulting ideas into songs.
In the end they create their own unique sound between rough dance music and
thoughtful melodies with a spherical approach.

First trials and improvisations, published under the idea of Maren Montauk`s
multifaced pop approach – “electric vision” has been performed at the Manyo bar
in Berlin. But when Maren’s “electro red” dress pulled the trio through Weimar
and Berlin they get sure to pick the name “electrorot” for this project.

At the same time, the online independent-label “unpicked.net” noticed them
and they worked together.

They performed as the opening act of the Canadian band Memoryhouse, and
at differend kind of parties and clubs (including King Kong Klub, Magnet Club, Lido).
The first EP will be published in 2013.