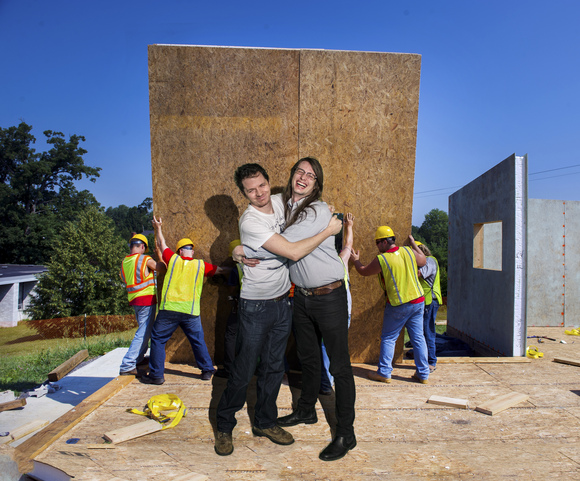 Ed Schrader’s Music Beat are a two-piece band from Baltimore who play elemental, stripped-down postpunk, and who find a surprising amount of variation in that description.

Frontman Schrader sings while banging on a rudimentary drum kit — one he plays standing up — and a metronomic rhythmic pulse is just about the only connecting thread running through all the duo’s songs. They can do frothy, feral trashcan screams, demented psychedelic garage, and tunefully sinister indie-pop. Schrader’s voice is a baritone croon, and it serves them well whether they’re sprinting or sidling. Opening for fellow Baltimore band Future Islands, they pounded away confidently in front of a crowd that didn’t know anything about them. They carry themselves well.

Ed Schrader and Devlin Rice are Ed Schrader's Music Beat from the fair city of Baltimore MD. In 2008/09 many had seen Ed "live" with just a floor tom, one light, plenty of jokes, and commanding voice. This era often left people with a sense that they had just seen a man unhinged trying to tell them something sacred in the form of a song, or something, they weren't too sure what they saw. After a few tours on his own, in 2010 Ed asked Devlin to help him expand the songs with his limited knowledge of the bass guitar. Now the "live" show is one guy playing a drum with a light shining, singing his ass off and another dude with a bass, in the dark laughing at the other guy's jokes. This era (which still continues) tends to leave people with that same fascination of the sacred unhinged but now it seems a little less scary, more familiar and they can can bring their dates to see this "cool band that you might not have heard of".

This union shortly brought about the release of Jazz Mind on Load Records which featured collaborations with Randy Randall of No Age and Baltimore sound gurus Matmos. Jazz Mind captured the raw and jarring "live" show with songs that seem equally loud and destructive, pensive and haunting. Since the albums release the duo have been touring non-stop through North America and Europe, by themselves mostly but have also been seen in opening slots with Dan Deacon, Future Islands and hardcore luminaries Ceremony.

Party Jail picks up where Jazz Mind left off with a greater focus on making the listener aware that Ed Schrader's Music Beat are not nut jobs who just play their best guess at punk. They wish to reveal that they are secretly a band that write pop songs, whether you know it or not.