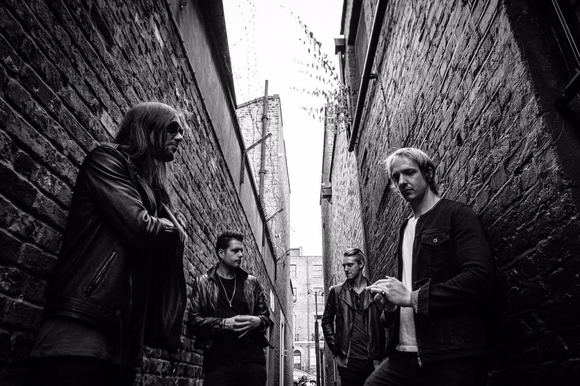 'Imagine the musical equivalent of an excited child being spun vigorously on a roundabout, that’s how our heart and head feels after just one play.' Right Chord Music Fag-smoking, beer-swigging, string-strumming, floor-stomping, sweat-mopping, head-banging, , hip-shaking, good time rock n roll!.. the indie track of the year!

This is one of those top drawer songs that sees everything fall into place from the off. 10/10
U&I Magazine

Echotape was formed by a group of four like-minded guys from the music
scene in a small, off-the- map town in the South of England.

Living together in their own studio and flat, the boys set about getting their
music heard from all corners of the globe. Their sense of adventure has seen
the band perform from Hollywood to Holyhead, Moscow to Madrid. Feature in
London’s Tate Gallery, have naked stage invasions in Dublin, and jam
onstage with Carl Barat.

Their DIY approach was featured in Sky News' report and interview with the
band on the DIY ethic amongst new artists in November 2013. Their single
'We Should Feel Like We Are In Love', trended on SoundCloud after release
in April 2014, with a sold out single to boot. This also saw the band invited for
a studio session with BBC Introducing South, and spend the summer on the
festival circuit at the likes of The Great Escape, Liverpool Sound City and
Blissfields.

'Whiskey Bar' followed in late 2014. With anticipation and the fanbase building
they performed a sold-out London show and gained 100,000 plays within the
first 4 weeks of release. This track was playlisted instore at River Island with
BBC 6Music, BBC Radio 2 and global radio support.

In March 2015, Echotape toured the UK and Ireland in support of their single
‘See You Soon', smashed through the half-million mark on soundcloud plays,
had further global radio and River Island support, sell out their first headline
show overseas and perform to a packed out tent at Vestrock in the
Netherlands to rave reviews. They even had The Libertines tweeting and
endorsing the band.

Echotape finished a busy summer by jetting off to Russia to play V-ROX
festival to an audience of over 15,000. In the autumn the band travelled
across to the Netherlands to perform before locking themselves away to
record.

The new album, ‘Wicked Way’ is complete. 11 summer anthems, all crafted
and recorded and produced by the band in their home studio. The album has reached charts in Holland and other parts of Europe.