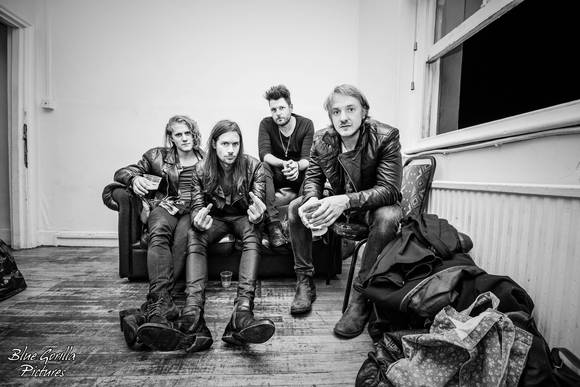 Echotape was formed in 2011 by a group of like-minded guys from the music scene in a small, off-the-map town in the South of England.

Living together in their own studio and flat, the boys set about getting their music heard from all corners of the globe. Their sense of adventure has seen the band perform from Hollywood to Holyhead, Moscow to Madrid. Feature in London’s Tate Gallery, have naked stage invasions in Dublin, and jam onstage with Carl Barat of The Libertines.

Their DIY approach was featured in Sky News' report and interview with the band on the DIY ethic amongst new artists in November 2013. Their single "We Should Feel Like We Are In Love", trended on SoundCloud after release in April 2014, with a sold out single to boot. This also saw the band invited for a studio session with BBC Introducing South, and spend the summer on the festival circuit at the likes of The Great Escape, Liverpool Sound City and Blissfields.

‘Whiskey Bar’ followed in October 2014. With anticipation and the fanbase building they performed a sold-out London show and gained 100,000 plays within the first 4 weeks of release. This track was playlisted instore at River Island with BBC 6Music, BBC Radio 2 and global radio support.

Echotape have just announced the release of ‘See You Soon’ on 02 March 2015. The band will be touring again in support of the single with a UK and Ireland tour to be announced shortly and a busy summer ahead. Definitely one to watch in 2015.