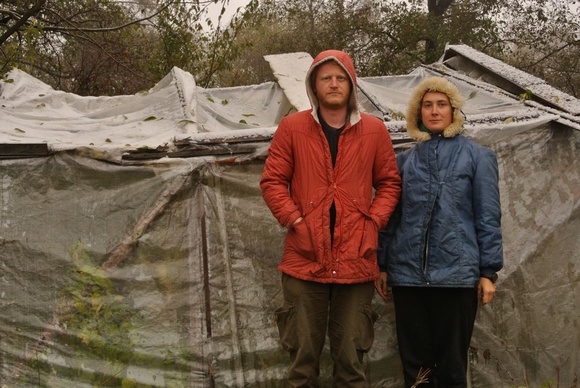 Bára Kratochvílová and Jan Kratochvíl - have carved out a niche with their rich, complex musical landscape.

Established in 2006, the Czech project have toured the world and received numerous awards for their idiosyncratic “pop for non-existing radios” or “folklore of non-existing nations”. With three acclaimed albums under their belt, an award for best soundtrack, and a growing global fanbase, DVA are one of the most successful Czech bands to emerge in the last decade.

"…this Czech duo gets blood flowing the opposite direction, slicing you a crooked smile, and beats a path you’ve only dreamed of taking!"
Tiny Mixtapes on Mulatu single (2014)

"This collection of 25 tracks dates back to 2009 - absolutely amazing blend of off kilter electronics, homemade percussion and traditional instrumentation. Wow!"
Gilles Peterson / BBC about Kollektt8 (2009)

"As we area about to enter September, this is turning out to be my album of the year"
Charlie Gillett / BBC about album Fonók (2008)

Operating in their own microcosm, DVA have stood out with an idiosyncratic sonic lexicon – “pop for non-existing radios” or “folklore of non-existing nations”, as they say. The duo – it takes two “dva” in Czech, to tango - Bára Kratochvílová and Jan Kratochvíl, have carved out a niche with their rich musical landscape. Established in 2006, the Czech project have toured the world, playing at esteemed festivals including SXSW, Eurosonic, Fusion, Incubate or OFF charming their growing global fanbase with smart sophisticated pop. In 2012, DVA toured the US twice and played more than 80 concerts in 10 countries. DVA's soundtrack for the computer game Botanicula scooped the main prize at Independent Games Festival awards in San Francisco last year, and was also nominated for the UK Sound & Music Awards.

DVA's much-acclaimed debut album Fonók was released in 2008 which was followed by Hu in 2010, and an eponymous soundtrack for the aforementioned video game in 2013 with a new record in the works. Their lyrics, written in an imaginary language, remain abstruse, yet universally comprehensible, while the music is similarly peculiarly universal – an aural collage of “pop, kitchen beatbox, tango, cabaret, circus, radio noise”, bearing their unmistakable stamp - quirky, but accessible. Championed by critics - from the BBC to national and specialist music press and beyond - and fans alike, DVA are one of the most successful Czech bands to emerge in the last decade. Aside from music, they are also active in theatre whose features they have transferred into the music as well. It is not surprising then that the project's seeds were sewn during the recording of the science fiction radio play by I. Asimov – Victory Unintentional. DVA are a living and breathing aural organism, its own thing.