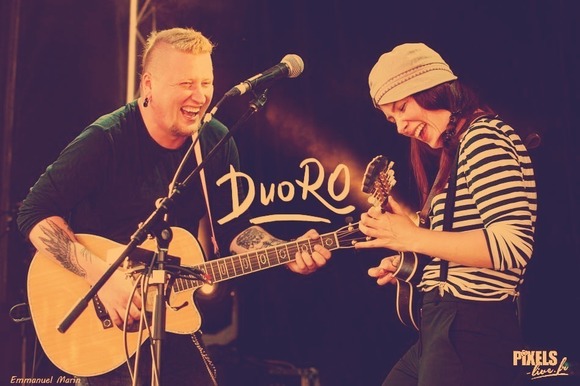 Artful musicians and dynamic performers, they play both electric and acoustic numbers to equal effect. Olga and Roman are together for not such a long time, but have already found acceptance among bluegrass and country fans in Russia and Europe.

A particular highlight (of 20 International Country Music Messe) was the appearance of Olga Egorova and Roman Palmov who perform as Duo RO. They can bring out almost everything from a guitar and a mandolin to polish finest bluegrass

Having wowed the La Roche audience in 2017 with their original and energetic style, we are happy to have them back to close the event this year. Taking the mandolin-guitar duet to new spaces, they jump from rock to jazz to classical songs, and them back to folk and bluegrass. Get ready to be blown away

Roman is an ace guitar player- a virtuoso with a highly dynamic style. Musical canvas he makes with his guitar lines is so tight that it nearly seems the one can touch it. Roman is able to absorb other musicians’ ideas and offer his own in return – that’s what makes him so great to work with

“Olga Egorova collaborated with us on our recording We Meant No Harm. She added so much of herself into the project – without intruding on our original ideas. In fact we were amazed at her contribution. We are very appreciative of Olga and her talents. She is Russian Mandolin Queen! As an added aside – our former manager (and now my Publisher), the legendary Joe Boyd, appreciated her contribution also”