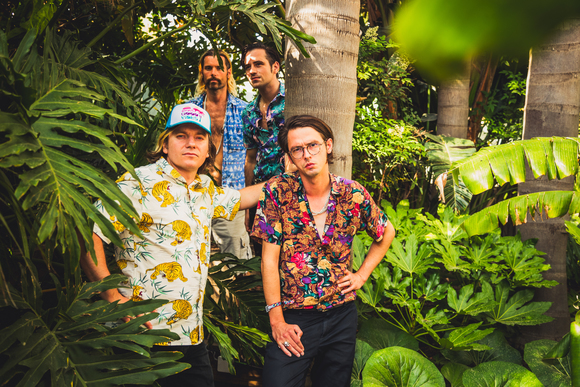 Come dive into the amazing, glamorous and nonsensical world of Dope Calypso, serving you honest rock from Budapest, Hungary.

Their sound’s like if all of a sudden, garage punk
fell deeply in love with the delicate pop music of the late sixties. You could feel this
somewhat extraordinary duplexity on their 2014 debut album Farewell To The Fairy,
Goodbye To The Ghost, and although that record appeared on all of the relevant
Hungarian charts, the perfect lovechild of the two genres was born when the next record
(Banzai! Banzai! Banzai!, 2015) hit the stores.

This time the two-minute long tracks lined up in full blossom: filled with obscure lyrics, tons of
references to pop culture and sacredness, telling absurd stories, while also working perfectly
as pop songs. Through their latest albums, (Mau Mau released in 2016 followed by Chaka
Chaka in 2017), they continue maintaining the method of creating and publishing a new
record every year, showing everyone, how surprisingly entertaining it is when you are totally
unable to take yourself seriously.

Genre-wise, the band is on the move from a Pixies like grunge to a concept based, Pond like
synthpop in the past five years, and it seems to suit them well. As a recognition of their talent
and hard work, in 2018 they were performing at Eurosonic Noorderslag, which made their
upcoming gig at Primavera Sound possible.

So if you like to call yourself an early adopter, consider Dope Calypso.