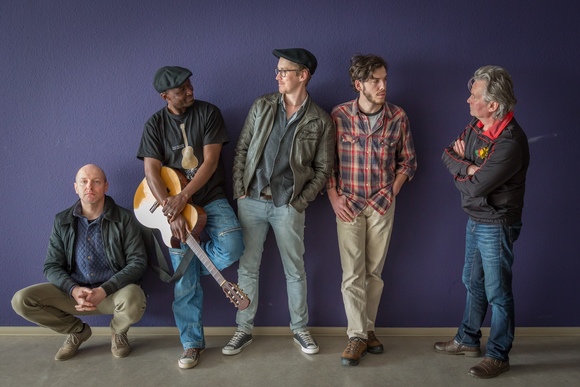 BIO Dolus was born in April, 1976 in the Congo (DRC) in a region of the equator called Boende.

He grew up and went to school in Kinshasa. As his father is in the army, the family had to move around quite a lot. This is how he’s come to speak several languages including Tshiluba, Swahili, Lingala, French and English.

Though his mother used to sing for him and his siblings, up until then there were no music activities going on in his life. Between the ages of 9-10, he started to have the passion for music. Not as much as for singing yet, but playing instruments. Since no one believed in him nor offered encouragement, he made his own guitar out of wood and strings. With this he could produce sounds and play.

The only problem he had was his mother. She didn’t want him going in the direction of music. He always had to hide is self-made instrument far from his mother's sight. The best place to hide it was under the bed. Being a very tidy woman, most of the time she would found it and throw it away or just brake and destroy it completely.

It went on and on until the age of 16, until his parents were convinced that Dolus wouldn’t sacrifice school for music. At this time he had more or less an appropriate guitar, but it was still hand-made. He kept up with school, and this allowed for his parents’ blessing in playing an instrument. After two years of practice with the guitar - he started to explore the bass. He gained a lot of confidence in it and went on to play in church. Being that his family was Christian, they offered their full support for him to carry on playing in the field of Gospel music.

In 2002 he moved to South Africa. In Cape Town he met a large variety of fine musicians. He collaborated with many of them and played in the band "Afro Fiesta". He played regularly at Spier in Stellenbosch as a solo guitarist and singer as well as with his "Dolus Trio".

In August 2010 he moved to Germany and released his first solo album in 2014. Since then he has been working with his band "The Free Spirits".
​