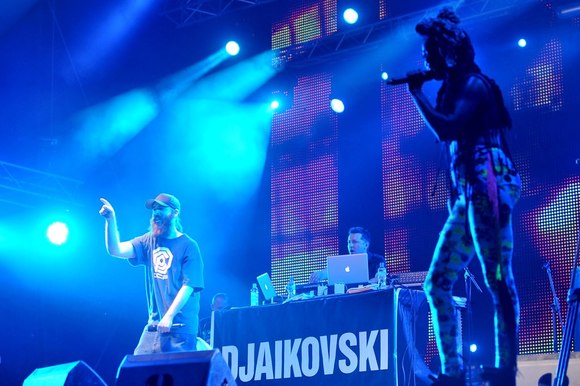 Password Production is a company working in the field of artist management, booking, concert promoter & festivals.

With a successful music career spanning over the course of two decades, Macedonian born Kiril Djaikovski (Dzajkovski) is without a doubt one of the most respected and critically acclaimed electronic artists from the Balkan region. Djaikovski is well known for his fusion of Electronica with traditional Macedonian music, Roma brass instrumentation and other Balkan musical influences. He is regarded as one of the pioneer producers to introduce Balkan sounds to the modern dance production. Seminal tracks like Primitive Science, Jungle Shadow and Raise Up Your Hand, have helped shape the sound of what is now globally known as the “Balkan Beat phenomenon”.
Kiril is also an accomplished composer of film and theatre music, with two new soundtracks just released, including this year’s Macedonian Oscar candidate, The Third Half.
The tracks from the new EP feature a wide array of guest vocalists from around the world combining Ragga, NYC Electro Rap and Jungle MC’ing. Already introduced at some of the biggest music festivals in Europe, his live performances feature a 7-piece band including 3 MCs/vocalists, and received tremendous response from audiences and critics alike.
Currently completing his new album, Djaikovski is sharing a taste of things to come with this EP featuring guest vocals from TK Wonder (US), MC Wasp (AUS) and Ghetto Priest (UK).